REVIEW; A Game For All The Family, by Sophie Hannah 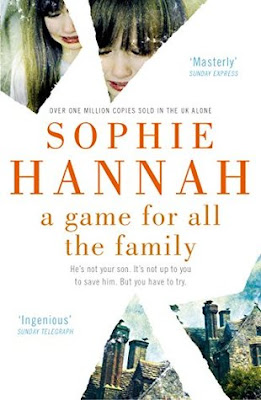 Justine Merrison has left her London life behind as she moves to Devon with her husband, Alex, and their daughter Ellen.
Finally, she gets the peaceful life she wanted. But after reading the beginning of a story Ellen is writing for school, Justine can't rid the feeling of something being wrong.
When Ellen's best friend George gets expelled from school, she spirals into despair. But when Justine goes to discuss George's expulsion with the school, George's existence is denied.
Being plagued with anonymous phone-calls from a woman who promises to kill Justine and her family if they don't leave, Justine's world is thrown upside down.
Who is the caller?
Does George really exist? And if so, why is the school lying about him?
And where did Ellen get the material for her murder mystery story?
Can Justine get to the bottom of things before she and her family come face to face with the real danger?

This is the second novel by Sophie Hannah that I've read, so I did have relatively high hopes. Ultimately, I felt let down though. I kept waiting for everything to fall into place and click and just make sense, but it never did. It all read like one crazy train and never really making much sense for the reader...

Characters: I didn't really like or connect with any of the characters in this. Justine was just crazy from the start and a little neurotic. Ellen was a brat. Alex was dull. George was an oddball and to me, didn't fit the personality of a child in his position. School teachers were not at all authoritative. Just completely all over the place! Justine was so easily spooked and it didn't seem like she had a back-bone at all in regards to dealing with her family, but this was the same person who forced her way into a school and spoke down to the principal? And this same person was later capable of murder without a shadow of guilt or shame? None of it fits!

Mystery: This is meant to be a story of suspense, to keep the reader on the edge of their seats and be scared, like the main character. But it was dull. My attention wasn't held to want to get to the bottom of Perrine's murder, the anonymous calls, the truth about George, the alleged unhinged Anne. I didn't feel the threat behind the calls either and the reader should've been scared for Justine- especially after she falls into a grave that has been dug! But nope, I didn't care. I ended up just skim reading just to be able to finish the book.

Story: All over the place. From the start... As they're driving to Devon the story is all haphazard. They're arguing in the car and Justine is overwhelmed after seeing a particular house. Then dealing with a crazy stalker and everything being intertwined with the story Ellen was writing -more interesting than Justine's story but equally as ridiculous - it was like the reader was meant to be sent on a mind f*ck journey but truth being told, the train never even left the station. Things did pick up pace towards the end, but I felt like we were still left without answers. The conclusion was so far-fetched and out there, I was left wondering "did I really just read what I think I read?" Hrm...

I'm quite undecided with this book. I really enjoyed the other book by Sophie Hannah and this sounded equally as mysterious - but I guess the story just wasn't for me. I did keep going and read through the whole thing, so it can't have been so bad!