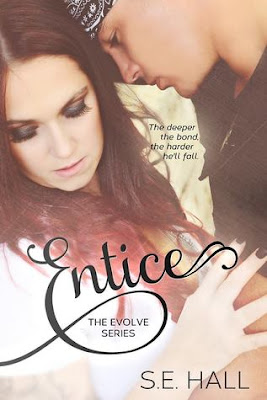 Sawyer Beckett has never done love, but watching his best friends all couple off together, he wonders if he's missing something.

Setting eyes on Emmett Young, Sawyer gets hit with love like a brick wall, and suddenly understands what it means to be in love and be so protective.

But Emmett has her own issues and past, and isn't an easy conquest to the infamous Sawyer. Can he win her heart and prove this is the real deal?

This is definitely the installment that could challenge Emerge in every way. I loved reading this story from Sawyer' eyes and really getting an insight into his mind and thoughts.

The love battle between Sawyer and Emmett was captivating, as the two stubborn minds were constantly put head to head. We also got more of Dane and Laney and their story marginally progressed in the background which was good support to the overall series.

The usual Caveman attributes were adopted by Sawyer and it got a little tiresome. All the men in this series have it and it runs a bit thin after a while as they may as well all be the one character... But it was still adorable in what ways Sawyer performed his caveman act.

Insta-love: Hrm, the one downside in this - I HATE insta-love so much. It's in so many novels and I can't believe it most of the time and just roll my eyes at it. Especially in a Sawyer situation where he sleeps around and doesn't have feelings so it seems more unrealistic and "novelistic" (e.g. something only ever happens in romance novels). Sawyer fell so hard for Emmett just on sight and knew NOTHING about her and it just so happened she lived up to all of his expectations and dreams? One thing we all get from The Great Gatsby is the real thing will never match the perfect movie-reel dream played on repeat in your mind so it was a tad annoying that he remained a love-sick puppy from the get go...

Sawyer as a character is amazing - I prefer him to Dane any day. He has great wit and such a carefree attitude, you can't help but smirk and laugh at his one-liners and comebacks. So seeing him fall so much for Emmett and her baby and be willing to go above and beyond to be there for her, it was so endearing and exciting.

Emmett... okay it took me a while to warm to her although I thought her character was brilliantly constructed and depicted. She encapsulated the helpless damsel in distress but yet trying to prove to everyone she was okay. I got a little fed up of her juvenile "running away" drama - Sawyer had gone ABOVE AND BEYOND to prove to her and I felt so sorry for him that she kept pushing him away and jumping to conclusions when it didn't feel like she really had as much reason to as she thought. Give the guy a break! It was clear in so many scenarios that his heart was in the right place and guys and girls definitely differ on what decisions/situations are considered important or note-worthy.

As already said, this really challenged Emerge for being my favourite in the series... but Emerge has definitely clinched the title! I think if there was a little more depth to this book it would've come out on top, but I think nothing can compare to the initial punch from Emerge...