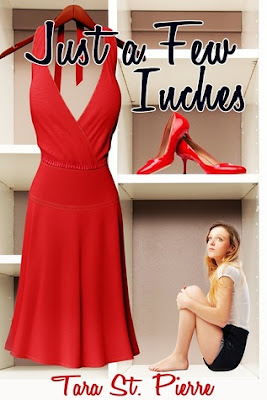 Carrie wants to fit into The Dress. It's less than a week until the Valentine's Dance and Carrie has the perfect dress to woo her boyfriend, but she needs to she a few pounds to fit comfortably and look the part. Resorting to the pull of diet pills, Carrie decides they're worth the shot to lose a few inches.

As the dance approaches, Carrie notices results when trying on her dress. Ceasing to take the pills as she has reached here desired level, everything has worked out... or so she thought. Carrie soon realises her height has been what's been reducing, causing her weight loss.

Forced to come clean to her parents, her life is changed forever after one insecure decision. Battling losing an inch a day, Carrie sees life from a whole new level, and doesn't know when it'll stop...

I really loved the idea of this novel. The blurb drew me in as it dealt with such a common and serious issue, in a clever way with some humour and imagination.


Carrie: She was a great lead character and dealt with an issue many females can relate to. Her change of attitude and growth ~ lol ~ throughout the story was extremely admirable and enlightening. She resorts to the diet pills early on due to her insecurities that she's not good enough physically, and needs to change her appearance to be worthy of keeping her boyfriend or being anyone significant. As she goes through her shrinking and physical change, she slowly realises that nearly everyone wants to change something about them and very few are happy in themselves, a sad revelation really. By the end, both in her narration and blog, she really pushes that we are who we are and only have one body so just embrace it. There's nothing wrong with wanting to healthily improve aspects, but it shouldn't be anyone's main concern.


Theme: This novel really works due to the deep and crucial theme that’s dealt with. It’s definitely one I can really relate to and its execution is probably one of the best. By incorporating the theme into a sci-fi, original and humorous manner, it subtly delivers a message of great importance. The media and inherent competition and envy has made nearly everyone to focus on the negatives of their body and what they deem “wrong” or in need of change by comparing themselves to other people, that are built differently and have different genetics, and to photo-shopped airbrushed pictures published by the media. In a world where perfection is glorified and want of a constant youthful appearance creating a mutli-billion industry, growing up we are subject to believing we can’t embrace our natural selves. This novel really portrays that everyone is different and whilst we can’t help but compare ourselves to others, we need to put our own body’s abilities first make sure we take care of our one body.

Story: As already said, this was also a great story if not looking too deep. It was definitely an original take on insecurities and self-image issues. Carrie gets down to being only 6 inches and it’s a captivating read as regular household objects prove to be of a lethal danger or troublesome to operate. There was great thought put into working out what actions we tend to overlook or take for granted, prove to be of great effort if we are to be smaller, e.g. reaching a doorknob or even operating a phone or keyboard. Add in a domestic pet that’s bigger than you, and the real danger is imminent.

Characters: The characters in this were well developed and realistic. I really liked watching the role Carrie’s two best friends played; Lauren and Trish. At first, I didn’t like Lauren much as I felt she wasn’t too supportive of Carrie and wasn’t too sympathetic towards what was happening. But really, she was probably the better friend as Trish acted like her publicity manager. Lauren actually cared for Carrie’s well-being from the get go, advising her against the pills from the start. She was described as curvy and not thin, but yet she had no want to change for the approval of others. Evan was beautiful; he clearly cared for Carrie at the beginning, before she started to change and he was such a crutch as she battled her issue. Whilst everyone focused on the change she was enduring, he helped her see that nothing else was changing and she was still the same gorgeous person he wanted to be around.

Pace: Majority of the time, the pace was spot on in this. However, the shrinking began within the initial 20%, making me wonder where the story would lead. Whilst the story didn't drag, it did seem to reach the main point quite quickly as it slowly built up to the ending. Which brings me to the ending... there was a great high point towards the end where Carrie faces a danger holds great suspense, but the ending was a little bit of a let down. It seemed a little sudden and rushed to cap off the story, after such a good build up and preceeding content.

I would definitely recommend this so all NA/ YA/ teens. It holds such a powerful message, whilst highlighting the dangers of becoming obsessed with your appearance - albeit in a more sci-fi manner but there's emphasis on the mental aspect too. It was a great piece of original work and I loved reading it.


Thank you to the author for allowing me read this in exchange for an honest review!