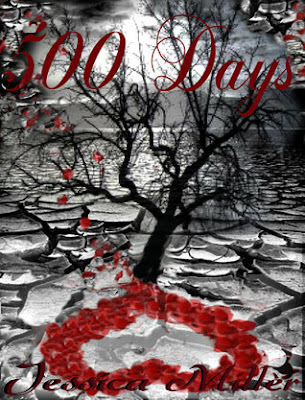 Casper is a musician and has one night stands. But he can't get one girl out of his head from New Year's.

Alex doesn't entertain any men. Raised by four protective brothers, she learned how to fight and be tough. But deep down she wants to be treated like a girl and experience things every other girl does.

As their paths cross they're faced with a mix of hatred and love. They can't stand each other, but yet they can't stay away. Persistant to fight against their wants, will they see it through and overcome their own fears and demons?

Firstly, the cover... I really dislike it. It looks like a bad stock image edited in Word and it's difficult to read. Having an appealing cover is something I love in a book and this just didn't work. If I had come across this in a list in Goodreads etc, I doubt I'd click on it - it doesn't give any inclination into what genre/type of book this is meant to be.

Names: One of the first thing that I spotted in this were the choice of names... Jaxson, Jasper, Jack, Jacob - four brothers. Add on a Jared into the mix somewhere... Then in another family unit there's Casper, Cayden, CiCi, Candace and Charles, and throw in a friend Colton. Seriously - what the hell? This bothered me so much as it was just so unrealistic, especially as it was both with the letters J and C and not just in a singular case. Then the main girl was called Alex (cool) and her friend was Declan... Now, I have no issue against going against defying gender specific names - but it was like every character had to have a quirky name! Why?


Editing: There was none... or if there was then Miller needs to fire her editor and get a new one. To say this was a painful read due to the editing is an understatement. From the start it was plagued with errors; punctuation, mixing of tenses, incorrect/bad grammar.

"He thanked me for the offer but decided to go surprise Jaxson now."- tense change.

Sadly, this standard permeated the whole read. I am a Grammar Nazi and do make mistakes myself and understand they can be hard to spot - but the amount in this was just unacceptable. Also, Mobi format needs A LOT of work. The text sizes changed mid paragraph from this to something like this and it just pained my eyes.


Characters: UGH! Okay, to begin with there were way too many. Alex did not need those four brothers. Really, she needed one, two max. Casper's family - wtf? They were totally irrelevant and I couldn't follow ANY of their family conversations and there were just too many names (beginning with C) and no character depth or description to identify who was who. Everyone was just thrown at us in one go and the reader was expected to just jump on board and know immediately everyone inside out. Which brings me onto character development. This is a huge must for me in a novel. I want to feel like I really know them and understand them but there was none of that. Every. Single. Person. In this was one dimensional. They had no depth whatsoever and no building or development.


Alexis: What a bitch! Was the intention to hate the main female in this book? She was so unlikable from the get go. She had herself so high on a pedestal and judged and stereotyped every single guy she met and as she felt they were judging her. Hypo. Crite.


Wow. What a tough girl, Alex. Or, you know... What a bitch! She hated on guys that wanted one night stands (even though the girl was willing in the first place so, slut shaming much?) But yet she played a much more manipulative game of purposely using guys regardless of whether they knew the deal or not.


This is 50/50. One way, I understand the point the author tried to get across - it's all a defense mechanism. But nothing gives you the excuse to purposely hurt people. Just no.


Casper: Meh. He's nowhere near the Book Boyfriend list. He's just boring and bland. Typical young guy who just wants satisfaction. He has no redeeming factors to make you feel for him or want him to get Alex or anything. It's just impossible to feel anything for any of them. He was a victim of Insta-Love and if you've read any of my previous reviews, you will know this automatically means you lose a star in the rating. IT'S SUCH BULL! The whole damn book is just him moaning about wanting her, not wanting her, wanting her again.


Writing: The writing in this wasn't too great. Moving on from the grammar etc, it wasn't thought out well or executed properly. It was nigh on impossible to follow the mind-numbing conversations and it rarely said who was speaking and following person A speaking, it'd list person B's actions, and it just got hard to follow. The same conversations were repeated again and again and again and again... I've never seen the one point been dragged out so much.

"Alex swayed her hips to the beat and swung her arms in the air."


This is to show just how unoriginal everything is. Generic overused sayings are implemented instead of trying to describe her dancing in any imaginative or unique way.  The portrayal of every action just lacked any emotion or feeling and it all just fell flat.

"Our dad died when we were young and our mom, well, she had to go away for a while. Jack stepped in and took over the role of both parents, and shopping for a girl was not something he knew how to do."


This really annoyed me. I always commend Show Not Tell. This just felt like being face slapped with a big piece of information and it didn't fit in with Alex telling this to the reader. We aren't a character in the book so why is she hesitant to reveal information? This should have slowly emerged throughout a conversation with another character and not stringing the reader along.

I really don't like posting bad reviews but I need to be honest. This was just a wreck. I'm so sorry and maybe it just wasn't for me as it has gotten some great reviews. I just couldn't connect or become invested in any aspect of this and in the end gave up towards the latter end.

Thanks to the author for allowing me to read this in exchange for an honest review. I'm sorry it didn't work out.