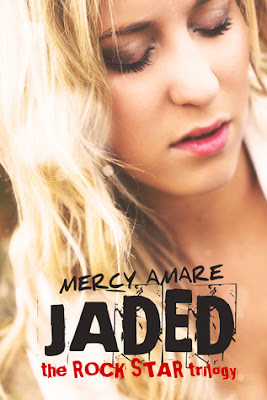 19 y/o Scarlett Ryan is a famous rock star since the age of 15. Having had enough of her controlling manager/father, she decides she wants to graduate high-school. Going to the town of Hope, she aims to lead a normal life away from LA.

Here, she meets Ethan and Stephan, stepbrothers, and befriends the two. Gradually getting closer to Stephan, she believes living a normal life may actually be possible.

But then more family secrets are revealed and Scarlett's life changes again. Just when she feels she has control over everything, more drama rocks her world, and she questions whether she'll ever be suitable for a "normal" life.

Alright, so I've read and reviewed the first installment of The Kihanna Saga by Mercy Amare and hated it. I was unsure as to whether I wanted to give Amare another chance, due to the nature of the negatives in that book... But, this first installment was free so I thought, what can I lose?

And it was worth it.


Scarlett: At first she seems so stuck up, but in her efforts to blend in, she is hilarious. I couldn't help but laugh along at her attempts to be normal. Despite having had four years of huge fame, she was still so grounded and likable. Her reaction to Stephan at the start was funky and as she began to let him in, it was great watching their relationship flourish. The great thing about her was that she had flaws, and selfish tendencies, but it all worked and she appeared plausible entirely.


Stephan: This guy - he earned the book a star alone. He was a great character from the start, with a great sense of humour. He has a great balance of seeming like a bad boy but being a genuine sweetheart deep down. He's not overwhelmed by Scarlett's fame or reputation and you can see that he's not using her. He too has his own secrets and history, and the small clues and discoveries are dotted perfectly throughout the story.


Story: This was a cute but dramatic story and plot. It went beyond your usual high-school love story and the drama worked in this. At times it did seem a bit over the top, but overall, it did work. There were good twists with Scarlett's family story that kept my interest. I liked the addition of the cars too. I'm a car girl and I appreciated the detail about them and the added bit of drama with the racing Stephan was a part of. (Also, Paul Walker is mentioned in this... sad times!)


Writing: Okay, there were some errors dotted along the way and certain facts were wrong. (Thor not a Greek God). But really, I didn't care with this. I raced through this and both laughed and wanted to throw my Kindle off a wall. The chapter names annoyed me as they just weren't necessary - but that's trivial.


Ending: WHAAAAAAT?!? C'MON SCARLETT. Safe to say I DID. NOT. LIKE. THE. ENDING. But hey, I guess cliffhangers is what makes you continue the story. But whyyyyyyyyyyyyyy!!!!! I'm excited to continue this series and find out what  happens!

I loved this. I'm glad I gave Mercy Amare another chance and I'm so happy this was a success. With "The Fab Life" a lot of my issues were to do with the writing and content, and I worried I'd have the same problems. Honestly, it feels like this was written by an entirely different author. I would so recommend this to YA/NA. Definitely a series I plan to continue.