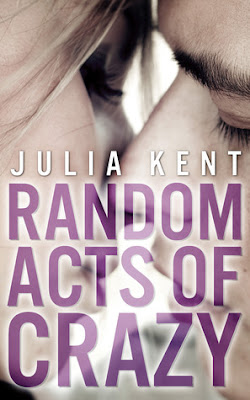 Darla is driving in her beat up truck when she spies a guy on the side of the road, naked except for a guitar across his body. Picking him up, she realises he is Trevor Connor, lead singer of her favourite band Random Acts of Crazy.

Trevor is hundreds of miles from home, finding himself in Ohio after getting high and then meeting Darla. Darla isn't his typical type, but her rough nature and lack of manners draws him in deep and it doesn't take long for them to fall for each other.

Then Darla meets Joe, who is there to bring Trevor home and she can't tear her eyes away from the god-like figure. And so ensues the drama.

This was an absolute wreck, I'm sorry. This sounded so up my street but it felt like it was written by a teenager attempting their first essay.

Characters: There isn't one redeeming character in this. None sparked any interest or contained any depth - at. all. Darla, is so unlikable. She is rude and foul-mouthed (which is fine) but she is glorified through the eyes of Trevor and Joe as if she's fantastic. Her curvaceous figure is always referred to, as if being a huge turn off but in Darla's case, it was beautiful - it seemed so hypocritical that a girl who both lead males would have deemed "not their type" won both their hearts. Meanwhile, Trevor and Joe have no attractive traits, except for their apparent gifted physical qualities.

Story: Like what the hell... there was no real solid story here. It started promising with Darla picking up Trevor and it being slightly amusing for about a page until suddenly it jumps to just sexual wants by both parties. Trevor and Darla supposedly fell in love within these pages, and yet there was nothing remotely intimate, emotional, loving about their exchanges. Again, no depth in anything.

Writing: The writing is nothing to rave about. Half of it is obscenities as it is (which in fairness, is forewarned) and the other half is stumbling sexual encounters and random train of stereotypical thoughts. All scenes are depicted quite straightforward and simply. Luckily, this aids the ability to skim - read, and admittedly, I skimmed through the latter half just to know where the story was going. In the end, probably should have just DNF'd.

Sorry, but do not recommend this. It lacks so much needed to create a captivating story with decent characters that have some depth and idiosyncrasies. Nothing really happens. The blurb sounds like such a fun and exciting concept, but execution failed.