REVIEW; Afraid to Fly (Fear of Falling #2), by S.L. Jennings 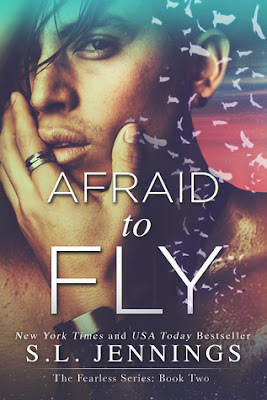 Dominic Trevino, or Dirty Dom, doesn't do love. He has the support of Angel and Kami and doesn't need anyone else. He sleeps with girls as a past-time and a way to escape the trauma of his youth. He feels numb.
Then he meets Raven. She makes him break free from the hatred and loathing he has wrapped himself in, but she has a past of her own and secrets that could make Dom regret trusting someone again. Can the two of them learn to forgive and love each other? Or will their past prevent them from their future?

Dominic: We get to read about Dom in more detail here. We discover more about his abuse and torment and get into his head. We also see how much he loves Kami and views her relationship with Blaine. I love how, even though he suffered a horrible past and childhood, he's put that experience towards helping other kids who are struggling and to try and help them. His character is so admirable. Now, he's no book boyfriend for me (Blaine won that one) but he has definitely got best friend material going on as Kami is one lucky girl having his support and admiration.

Raven: I loved Raven. I preferred her to Kami and although it annoyed me how she was so cruel to Dom, it was totally justified when the truth all came out. I love how S.L.Jennings manages to create intricate pasts and plots and yet steer clear of stereotypes. Raven's hatred for Dom was justified but when the reader sees things from Dom's point of view, your heart just breaks for them both. Raven is so strong and independent and almost stoic. She is so protective over her younger brother and he plays a cheeky role in getting the pair together. She is presented in a sort of bad light, we don't know anything about her and just see her being a bitch for no reason, but when all is discovered it just creates a wonderful spread of complex characters.

Romance: Similar to in Fear of Falling, the romantic element in this is executed so carefully and eloquently. The relationships in this go further than your average romance as they are all a family and support network. It's heart-warming watching Raven being welcomed into the family and become one of them and begin to trust Dom, despite it being so difficult for her to do so. Every emotion and exchange is so raw and strong, it adds so much depth and weight to it all, ultimately constructing such a captivating and engulfing read.

Almost surpassing Fear of Falling, Afraid to Fly is a beautiful second installment, still featuring Blaine and Kami, creating a wonderful overlap of both stories. Heartwarming and raw, it will have you in tears.