REVIEW; Because She Loves Me, by Mark Edwards 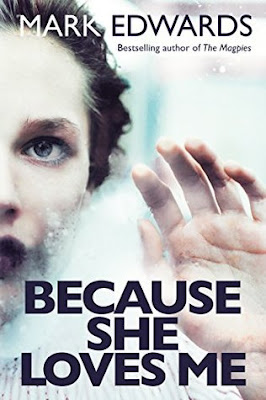 When Andrew meets Charlie he instantly falls for her. She is beautiful and funny and loves him just as much. Before he knows it, he's asking her to move in with him - everything is perfect.

But is everything as it seems? Andrew notices some things have gone missing, he's losing friends on Facebook, his pretty young cleaner is replaced with an older woman, an ex-girlfriend winds up dead. Charlie has shown she has issues with jealousy... but how far will she go to ensure she keeps Andrew for herself? Is she capable of murder? Or is it just a chain of coincidences... ?

Story/ Paranoia: Similar to The Magpies, the cause of torment and menace is a simple one. Supposedly all down to the jealousy of a girlfriend, which adds to the creepiness as it's something that could easily happen to anyone. I love how Mark Edwards can take a simple concept and make it grow to create such horror stories. Towards the end I was nearly shouting at people to listen to Andrew and stop the deaths we were expecting to occur as it all got heated. The one thing this does is get inside your head. Is Charlie who she says she is? Who is she? Is she lying? Is she responsible for strange things occurring? Is she mentally unstable? Is she just insecure? WHAT IS GOING ON?! It drives you crazy.

Twist: There is a twist in this and it is the reason why this isn't a 5 star rating... I didn't HATE the twist, which I won't mention as it is a huge spoiler. I just don't think it was necessary too much. It wasn't too awful; just before the twist occurred it was hinted at and I had a moment of calculating the possible plausible conclusions before the truth was revealed. I can see why people are annoyed at it - a solid story was built for everything that the reader knew to just be thrown to one side and BAM! something else with no warning... but a part of me liked it also. I liked it wasn't a complete predictable outcome and the reader was blind-sided by the events. I think my main issue is who was involved with the twist seemed off and it would have worked better if a different character was involved with a better reason...

Ending: I think the hardest part about psychological thrillers is constructing the ending. Do you end it on a high of the shock? Or finish off the stories of the characters? And to what extent do you follow their aftermath? Endings are delicate aspects of every story and I have to applaud this one. There was a suitable epilogue to the events and a nice ending that still leaves the reader wondering what truly occurs in the future.

I think this is my favourite Mark Edwards read so far. Possibly because I can relate to knowing jealous people and having been jealous myself at times, it's nearly more scary as you realise "this could be me", be it for either Andrew or Charlie's position! Recommend this for anyone looking for something unnerving and different to your regular reads.