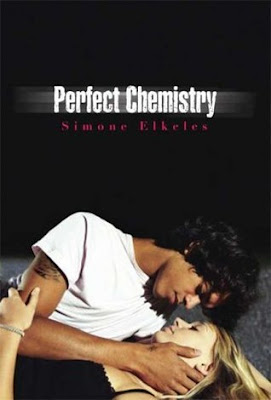 Brittney Ellis is from the North side and is the perfect girl: gorgeous looks, expensive clothes, new car, perfect blonde hair and the other half of the Golden Couple. At least that's how it all seems. Behind closed doors Brittney is struggling to keep it together with her absent father, arguing with her mother and caring for her sister.
Alex Fuentes from the South side and is part of the Latino Blood gang. After his father's murder he stepped up to protect his mother and younger brothers. He doesn't have a bright future and is destined to continuing up the gang ranks.
The north and south side people don't mix. But Brittney and Alex become chemistry partners and soon discover they have more than chemistry together. Love, secrets, lies. They have to try beat the odds to make a life together.

It took me a while to get into this. I found a lot of the writing quite juvenile and there were a good amount of typos.

Writing: there was too much tell and not just show. Nearly everything was explained to the reader, even when it was already clear and self-explanatory.

"My sister smiles wide when she sees me. 'Bwiee!' My sister can't enunciate words, but she uses verbal approximations. 'Bwiee' means 'Brittany,'"

"Mario laughs, not believing for a second his girlfriend would cheat on him." - this line really irked me. It was obvious when he laughed that it was all banter and joking, it just didn't need the explanation that he knew it was all a joke etc. Give the reader some credit!

Romance: the premise of this story is really heartwarming and cute. Two people from different sides of the track, coming together to bridge the gap. Their relationship is extremely slow and fragile
- at least from Alex's side it was all down to win a bet. This definitely wasn't a steamy story, extremely tame and PG but yet in the same story there were gang fights and murder... If we can witness a bloody murder can we not handle more than a kiss between the two?

Brittany: I hated her at first. I was on team Alex who viewed her as the fake blonde, wrapped up in appearing perfect even when her life was falling apart. But gradually we see the glimpses of her life that explain why she is so adamant to appear like she has everything together, as in reality, appearing like she's ok is the only thing she has that is ok! By the end I really felt for her and almost cried for her in the hospital scene. She's a huge advocate for stereotyping and not judging people based on what they seem.

Alex: he wouldn't make it on to my book boyfriend list but he is sweet. He was part of a dangerous gang but I never felt scared of him. I felt he needed to be a little more intimidating, mostly at the start concerning Brittany, to really convince us of how dangerous his world was. We saw a huge inner turmoil and emotional battle with him, which showed his vulnerable side. The reader was exempt from the harsh version of him all the North sisters feared.

I enjoyed this but it was a simple read. I think it needed some work to really draw focus on the emotional scenes between Brittany and Alex. Cute story overall.