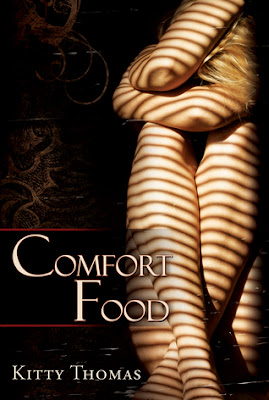 Emily wakes up tied to a chair in a cell. The man who kidnapped her won't speak to her, but finds ways to communicate. Emily soon learns the rules; try to give him what he needs and she will be rewarded. It's okay if she fails, she just has to try. But refusing him results in solidarity punishment. Emily soon falls victim of Stockholm Syndrome and would do anything to not be put in the lone dirty cell she woke up in. She needs him. And will do anything to keep him.

I've read Captive in the Dark and Tears of Tess and wrongly assumed this would be similar. But it was a great surprise.
We read this from Emily's POV so learn the truths of her situation and her captor as she discovers them. We are brought along on the journey with her.

Emily: she's rather strong to begin with but uses her knowledge of psychology to play the game. She catches on quickly how she must act to not be punished, but yet still remembering she has to fight to get free. I liked she wasn't some helpless victim from the get go. There is no romance here at all. Emily is there to satisfy his needs and that's all. But he becomes all she knows. Once returned to the real world she can't adapt. She craves him. And so offers up her freedom to return to him. Not going to lie, I didn't understand this power move. I can understand the bond she felt or why she wanted him, but I can't fathom how messed up she became to be willing to return to that. It was abuse. There was nothing romanticised to give even a glimmer of them having something balanced. But I guess that shows the level of psychological abuse Emily endured to be conditioned to such degree to depend on a man, or monster.

There aren't many explicit scenes in this. It's definitely a story focusing strongly on the psychological abuse and wearing down of the human mind. It's quite extraordinary.

I liked this. I'm quite neutral though. I didn't love it. It's a heavy read though focusing on the psychological abuse and mind games and it's very easy to get lost in Emily's world of terror.