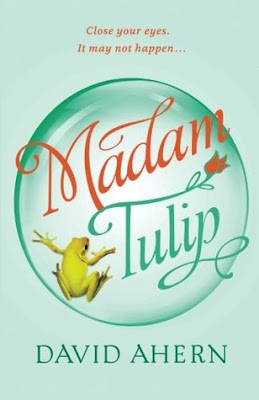 Derry O'Donnell is a struggling actress in Dublin City, with a psychic gift. In need of some money, her friend encourages her to do psychic readings and so Madam Tulip is born. But Derry is caught between the drama of her separated parents and soon finds herself in even more trouble when she performs at a celebrity event that sees the murder of a famous rapper. Derry is thrown into a mess of suspicion and doubt, as she tries to escape being framed and save her best friend from taking the blame.

***Thanks to the author for a copy in exchange for an honest review!***

I didn't know what to expect with this other than a main character who was psychic and a murder mystery but the blurb really piqued my interest as being unique and unlike any other story out there.

Derry: She was hilarious! She had fantastic Irish wit and I enjoyed reading from the POV of a Dublin character as a Dubliner myself. She had psychic abilities although somewhat accidental or coincidental as her father, Jacko, would piece together her predictions. Thing about her was that she came across like an average young female that wasn't over the top with note-worthy characteristics that plague NA stories trying to show some strong-willed perfect unrealistic role model for readers. For once, the protagonist seemed real and "just like the rest of us."


"The truth was, Derry O'Donnell was fully qualified for unemployment in three different dialects."

Setting: I'm so used to reading stories set in America and most Irish based novels are targeted for older readers so I was excited for an Irish set novel with a young female protagonist that was actually written by a legit Irish author... There's nothing worse than a character written with a nationality different  to the author and it just being plagued with stereotype so it was refreshing to read a realistic representation of a character in terms of their nationality. The story was mostly set in Dublin and there are some noteworthy landmarks mentioned (Trinity to Guinness Storehouse), creating a good map for the story to evolve, adding a good dimension to everything.

Writing: There is good pace to the story and the drama and mystery tumbles through nicely. There is great charm and humour to the story, which really did it for me. I laughed so many  times and enjoyed the colloquial language and throwaway remarks permeating the story. Some phrases may not be universally understood but I think this a  good thing - I'm so used to phrases common to other worlds that don't read well or make sense and I felt like at times I for once understood the private joke woven between letters.

"Derry was enveloped by a gloom darker than the stairwell outside her door, whose bulbs hadn't been changed since the Titanic was news and the Irish ate potatoes rather than Croquette Perigourdine with truffles and nutmeg."

"Normally, any man who called Derry baby was mere seconds away from what her father metaphorically called a clip around the ear, though in practice this could take the form of a stiletto on the instep or a toe in the shin."

Plot: There is a great murder mystery / drug related scandal among all of Derry's psychic escapades with the various characters. The suspense definitely piqued my interest as I seeked to get to the bottom of it all. I just wish that there was more focus on Derry's tarot readings and seeing something more dangerous or shocking - it all seemed a little reserved and I doubted if she really had any talent.

This is definitely a unique story and I'll remember it. It is so original and engaging and has so many "laugh out loud" moments. Derry is a brilliant and authentic character that you can't help but fall for and cheer her through all the drama.