REVIEW; Did I Mention I Love You? (DIMILY #1), by Estelle Maskame 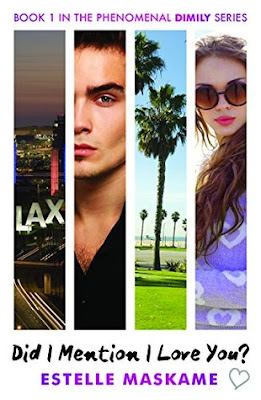 Eden's parents are divorced. She agrees to spend the summer with her father and his new family in California. She knows immediately she doesn't fit in.
The eldest step-brother, Tyler is not happy she is a part of their family. But he can't ignore her when his group of friends take her in and show her the Californian lifestyle. Tyler's girlfriend doesn't make it easy for Eden to fit in either. Eden is thrown into a life of drama, secrets and deceit. But she can't ignore the feelings she has for Tyler, and the need to see him for who he really is.

This is probably a 3.5 star rating. I loved the plot and the idea, but it was nothing special at the end of the day.

Eden: I felt for her. She was thrown into a new life with a new family and a new group of friends and didn't feel like she fitted in. But she was so sincere and caring. I loved how she was determined to break down Tyler's walls and see the real him. Always being there for him despite being given the cold shoulder. She was such a good person. When she realised her feelings for Tyler, she couldn't continue if he was still with Tiffany - a girl who really didn't deserve that act of kindness and consideration from Eden. She's also very strong willed! She put an end to things for the greater good... I don't know how she managed that at all.

Tyler: God, what a troubled guy. He had the typical rock hard exterior and acted like a right piece of work. He was hurting so badly and trying to put up a front to everyone, that he was on a direct path to self-destruction. He doesn't seem like a book boyfriend contender, but definitely a book best-friend. He's so charming and hides a wonderful personality behind his walls and I was cheering him on whenever he would let Eden in.

I enjoyed this but felt the characters were too young. I would have rather they had been a year or two older just because I couldn't really place their mental age with their real one. It all seemed a little off.

While this is about a forbidden romance it's also a great coming of age read. It deals with a lot of the pressures of being a teenager and growing up and dealing with all sorts of issues. There is drug and alcohol abuse as well as the usual insecurities we all feel.

This is a light quick but deep read. There are twists and turns and secrets and not too predictable. It will also probably drive you mad if you don't have book 2 ready to jump right into afterwards.