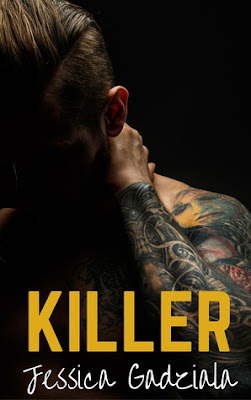 Following Shooter being saved by Alex and Breaker, he is sent back to Alabama after word of his father's death. He expects to be in and out.
Amelia lived beside Shooter's dad, and is grieving over the loss of her friend. She meets Shooter and he gets more than he expected when she grills him for bad-mouthing his father. But she gets her illusion shattered when he confesses how his father treated him as a child. As sparks fly between the pair, Shooter tries to break down her walls. But trouble follows him and Amelia is in direct danger and he wonders if she will ever fit into his world.

I didn't think I would prefer Shooter's story over Breaker's but I fell hard for him.

Shooter: He has had a really hard life. His father abused him and he didn't care that he died. But he gets quite the shock when he realises that his father was doing better for himself and was sober. After befriending Breaker he was able to turn his life around and make a name for himself, now being one of the best contract killers and earning the nickname Shooter. I liked his personality from when we saw him in "Monster", his carefree and smart-mouth attitude was just infectious. It was interesting to see him try to take Amelia serious and not revert to his old ways of joking around all the time. It was great being able to see a deep side of him and be raw and vulnerable to Amelia.

Amelia: She is totally different to Alex. Amelia has had no involvement in the dark and dangerous world, although having a hard life herself, and she recognises she doesn't belong in his world. She is quite innocent and almost naive, despite having a strong attitude. Even I wanted to wrap my arms around her and give the poor girl a hug. But she was capable of standing her own and didn't need Shooter emotionally or to save her.

Story: I loved the action in this. In some way there was a lot more suspense and drama involved as the threats weren't known straight- away and we find out the danger alongside Amelia. There was a lot more romance in this one, with the relationship between the two building slowly and steadily. It was so fragile between the two and I was willing them on so much and nearly screamed a number of times at Shooter to wake up and say the right thing! There was again, great pacing with the balance between action and character development perfectly depicted. It was great seeing Alex and Breaker appear and have them still fighting as usual, riling each other up.

I loved this. It was so much more emotional and I became so invested in these characters and their story. Absolutely adored it.