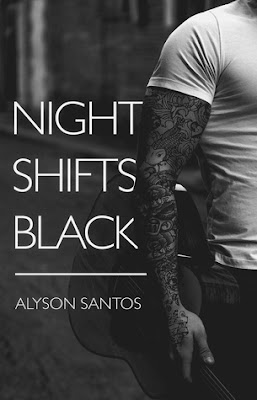 Callie is disturbed one day having breakfast, when a tattooed stranger asks for her seat in a café despite others being free. She gives it to him, later finding out that the staff watch him come in every day to stare at the seat before leaving again - never staying or buying anything, just starting. Callie feels drawn to him. Drawn to finding out what has him come in every day and why that chair is important. Slowly, he lets her in. But Callie may find out more than she bargained for.

I'm really frustrated by this book. This started out as a 5 star read and then slipped rather quickly to 3 stars and I'm so annoyed about it...

Callie: I liked her. I liked she was the only one brave enough to speak to Luke, get to know why he came into the café all the time and just listen. Soon she becomes integral to Luke's story, as we are reminded this isn't about him though. She is a huge rock for him in dealing with his depression and moving on and her strength is admirable at never giving up or becoming dissuaded from his actions.

Luke: Oh man, I felt for him. That man was torturing himself and I could totally see why. If only he had gone to meet his wife that night. I nearly hated him for causing her death! Or for not caring enough in the first place at least. But he did his suffering times over and deserved a break. I loved reading his part in things. He loved Callie and needed her, but wasn't in love with her. He just needed her to make him realise things would be okay. He could forgive himself and move on to a better life. He needed to get over the chair though... so what's the chair all about? The chair that has him come into a café and even steal it on one occasion after causing a scene, is the chair he was meant to be sitting in to save his marriage. The chair his wife sat opposite waiting for him to show to save their marriage. The chair she sat opposite when deciding to commit suicide. The chair she sent him a photo of so he could carry his guilt around with the "if only's"... heavy. right?

Casey: This is where I am conflicted. I really loved him and his character. I loved his relationship with Callie and how much he wanted to help Luke but how he couldn't deal with always being pushed away. Plus, Luke's wife? Yeah, she was Casey's sister. So he had to live knowing his best friend failed his sister. But he is a friend everyone needs. He would move heaven and earth if it meant bringing Luke back to his music and back to him but he just can't get through to him and is growing tired. Cue him meeting Callie though... and the pair find themselves entangled in each other...

Romance: So at the first half, the reader is led to believe that Callie fancies Luke, even though she reminds herself it's never going to happen. She needs to support Luke and she can't confuse her role in his life. He is in no way ready to move on from the death of his wife until he can feel he is acquitted. But still, glimmer of hope that the two will help each other and find their happy little way together... nope!!! Apparently Casey and Callie are meant for each other and it very quickly becomes THEIR story and Luke battling depression and guilt on the sidelines. He is what the book is meant to be about! I know we are told it's Callie's story but I feel like the blurb is a fraud. Casey is integral but not even hinted at. It all just became focused on their relationship and slowly introducing Luke back into the music industry. It just lost all the tension and darkness by the turn of a page.

I'm still saddened by this. It wasn't the story I was expecting to read but I feel this is the purpose of the book and what the author set out to do. For me, I just felt disappointed as it started on such a high. That aside, still an addictive read.