REVIEW; Broken and Screwed 2, by Tijan 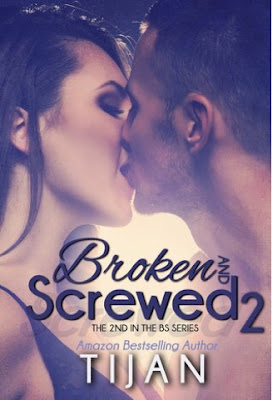 Alex's parents have left her to fend for herself and she is angry. She has questions about her brother and his death and is demanding Jesse gives her the answers. But when she goes off to college she realises Jesse is considering a celebrity almost and being associated with him would put her right in the limelight. Also, once reunited the pair can't deny their chemistry, and soon fall back into old habits of finding strength in each other. But now Alex doesn't want a public relationship, and the secrets Jesse knows about the death of Ethan, may tear them apart for good.

Alex: She is still hard as nails but opens up so much more. She is able so slowly let her guard down. She remains so strong solely to protect Jesse from knowing the truth about her parents- she doesn't tell him they upped and left her and don't care for her, so she doesn't shatter his illusion of the perfect parents. She's still happy with whatever she can get from Jesse, even if it means her own heartbreak. Alex also got money from her grandfather, enabling her to go to college and pay for anything. I liked for once a character didn't take the high road and turn down money just on principle of where it came from.


"I hadn't known my grandfather was wealthy, but I capitalized on it. I had the money so I was going to use it"

Jesse: he is still as strong and powerful as ever, but we also get a rare glimpse of his caring side. He really wants to be with Alex, properly and not in secret but yet she's the one adamant to keep things quiet. Somewhere along the lines he found his closure, I think some of this coming from the truth concerning Ethan's death being finally exposed while he was keeping his promise to Ethan at the same time.

Cord: It was really good being able to see more about him and see his character develop on the sidelines and see another side to him. Maybe he will get his own story? He was like an epic big brother figure and I loved his banter with Alex but yet his automatic protective nature as he know she is important to Jesse.

Story: her parents in this really were horrendous and so awful, but it all makes sense to how they had acted, even if there was an attempt of justification and remorse. There's the added drama of the secrets surrounding the death of Alex's brother and her quest to really find out the truth. There isn't a huge epic romance, but yet there's still an exciting and realistic relationship built between the pair.

This definitely lived up to the expectations set from the first book. It has everything and more, a story of jealousy, hurt and betrayal. And finally, all the answers we've been wanting from the beginning.