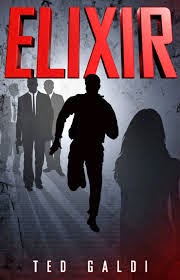 Summary:
By his teenage years Sean is financially secure due to his winnings from a game-show, where he exhibits his extensive knowledge and mental abilities; a game-show he only entered in the hope of finding someone smarter than he was.

At 14 he is attending a leading Tech University, and when he creates an algorithm that attracts the attention of the Government, Sean has to set up a new life in Rome with his aunt.

Four years on and he meets the love of his life, Natasha. However after she falls ill from contracting a virus overseas, Sean has to try and accept that he can do nothing for her... Or can he? Hacking into confidential files attracts unwanted attention and suddenly he is running both for his life and to save Natasha's.

My Thoughts
I really enjoyed this book.

There were no grammar errors (as far as I could spot) and I loved the style of writing. There weren't too many characters, which is a problem with a lot of modern books where the story is drenched with insignificant/pointless characters.

The story is written from Sean's POV and I liked how his mental anguish was portrayed, how he saw his intelligence as a hindrance more so than a gift. There was romance but it was not made the focal point of the story, there weren't even details of how Sean and Natasha's relationship developed but this worked for me as there was no wasted time spent on building that up.

I don't understand people's reviews about there being too many stories going on... In my opinion it was pretty straight forward and I loved the simplicity of it all but how it was made complex enough to be engaging and story worthy.


My only issue with this book is the age of Sean and Natasha. When all this happens they are only 18 years of age and I personally feel their attitude/actions would be more credible if they were in their twenties; (mainly as I am 19 I fail to relate to characters younger than me reacting to such situations!)

I also expected a bit more "action" between Sean and the Government...There was a lot of potential for a lot more drama there but I guess it was good it wasn't over done either.


Overall, I would definitely recommend this book. It is original and a real page turner and I am thankful to the author, Ted Galdi, for the opportunity to be able to read it on advance in exchange for a review! It's a brilliant debut novel and should more novels by Galdi follow, I am sure I shall be adding them to my "To-Read" list! Well done!