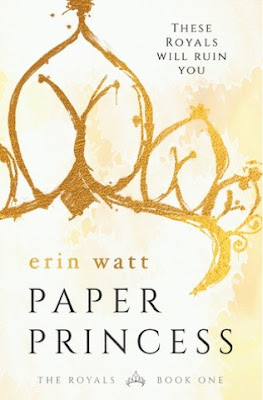 Ella's mother died, she never knew her father, and she has been working at a strip club to earn money. Then one day Mr Royal walks in, claiming to be a friend of her deceased father's, and now her legal guardian. Ella is now a part of the Royal family with five new brothers; Gideon, Easton, Reed and the twins. They aren't going to step aside and allow her to waltz in and be a part of their family and get a penny of their father's money.
But Ella is made of steel and has a plan of her own. But it didn't involve falling for Reed, the leader of the pack.

Fell into this immediately and desperately need book 2!

Ella: at 15 she joined strip clubs to pay for her mothers medical bills. She has such strength to put herself out there and out of her comfort zone to get money and make ends meet. She's then thrust into a new school where appearances matter and yet has no interest in moving up the social ladder. She shows great character development - she's not above accepting money that she needs for college in return for her safety by staying with Mr Royal. She's so strong and resilient, the boys don't exactly welcome her in and make things difficult as she's pressured to live up to the expectations of being a Royal. I love how she's been through absolute hell and yet isn't some broken, despair girl needing a boy to help her.

Reed: he is so damn stressful, poor Ella! I'd have punched him so many times out of annoyance and frustration for just being all over the place. He's portrayed as violent and for once it's not romanticised or made seem like it's okay. None of the actions of any of the sons are excused. But at times you really believe he hates Ella but yet it's the opposite. He doesn't treat her delicately either - he is through and through a bad boy.

Romance: the romantic storyline in this is very delicate and subtle. There's nothing explicit or too daring. The novel is inbetween a new adult and young adult book. But yet it's written in such a way like it's the next big budding romance.

Easton: whilst Reed is harsh and aloof, I think Easton is my favourite Royal. He is scary still, but laid back and hilarious and I loved watching the harmless flirting between Ella and him. He's so much more charming and warm, he's more of a book boyfriend than Reed.

When reading this book 2 wasn't published yet and I'm devastated. I rarely read a book one and NEED the next book immediately but I was left heartbroken. One of the best books I've read and this series has made it into my favourites of all time.