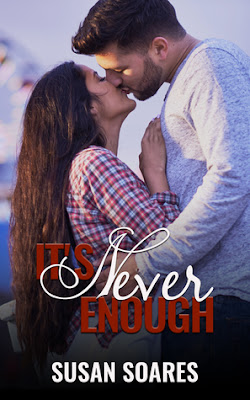 Following the death of her best friend, Mallory is suffering with bulimia. She is in denial that it has a hold of her and believes she has it all under control.
Devin has a troubled past and is suffering in his own way in an attempt to be the man he is expected to be and take care of his younger brother.
When the pair meet, they instantly have an undeniable connection and neither can stay away. Both of them could learn something from the other, but not if they can't learn to let their guard down and trust.

Plot/Story; I really enjoyed the overall plot going on. The mix of Devin’s PTSD/backstory and then gradually finding out what was going on with Mallory and her battles with bulimia and coping with moving on from the death of her best friend. The casual romance that built between the pair was so lovely and real; it didn’t seem forced or too fast. Devin had a suitable sense of mystery to him and although I guessed he had PTSD, there wasn’t overkill with the symptoms. The reacting to loud sounds was obvious but the more subtle signs like refusing to go into Mallory’s bedroom made his condition seem more in-depth and realistic, beyond the “stereo-typed” indications.

Mallory’s struggles were displayed very well. Her quirks from dealing with bulimia were well intertwined with the story; eg the opening chapter in the café and dealing with the different worker behind the counter, then leading her onto meeting Devin. The tiny strings that brought each story to the next were executed so well that nothing seemed overly coincidental.
The ending wrapped up the story nicely ending on the peaceful note. The fact it was Mallory trying to be more peaceful that resulted in her having proper time with Devin and how non-peaceful the two of them were whilst dealing with their past, it was a sweet culmination to all the drama they’d been through.
Characters; I really love how the characters are written; I think it’s one of the best aspects of the writing. Mallory has obviously had a hard time with bulimia etc and her quirk for baking was so interesting. The amount of detail that is given about her baking makes her so alive and her interests are believable, it’s not just a characteristic that’s thrown in half-heartedly. It also ties in well with her obvious struggle with binge-eating.
Fiona as her friend seems so genuine. Her care and love for Mallory is evident and her reaction when she realises Mallory hasn’t been coping is so heartfelt and real. Yet again I like how the best friend role is filled with a character that clearly has her own feelings and is a person in her own right and shows some tough love. That makes her so real.
Devin; He definitely had a lot of palpable charm at the beginning that drew the reader (& Mallory) in. He had good humour, placing Mallory’s name on the seat, and although described as physically attractive, he definitely had an attractive personality. At times though I felt like he fell apart a little; now if this was due to his PTSD getting worse than that’s totally understandable, however, it seemed like he lost the extent of his humour and wit as time went on. If this is related to his issues maybe it’d be reasonable to have Mallory wonder why he’s changed a little… aside from when he ignores her calls and skips town as that’s pretty obvious he’s harbouring demons by that stage.
Not so keen on;


It wasn’t a huge factor but I didn’t really feel for the story going on with Mallory’s dad and Janet. As a sub-plot it served well but it didn’t seem too necessary or needed. Whilst the miscarriage was a little needed to get Fiona to want to stay with Janet for a while and cause the drama between Fiona and Mallory and ultimately Mallory’s binge, I’m not sure if there needed to be a dynamic where the pair weren’t together but were expecting a child and then once they lose it they get back together and decide to try again. It was clear Mallory was affected by the prospect of a child being brought into the world to a “broken” family as she never got her happy unit herself, but with the romance story, bulimia and Devin’s problems, I’m not too sure if it’s really needed to that plot-twist extent. Maybe would be more suitable to have a scare but she doesn’t lose the baby?

This was an enjoyable read. The romance was adorable between the pair and written about beautifully rather than graphically which made the idea of their true feelings for each seem so real. Eating disorders can be somewhat of a taboo topic but this was one of the first novels I’ve read that had one intertwined so well. There was no soft-stepping the issues but it was also clear how “normal” or okay Mallory seemed even though she was finding it harder to cope and how easy it is for people to deceive their loved ones and themselves.