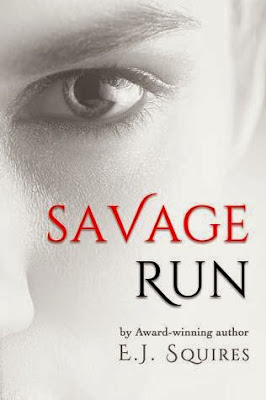 Heidi is a 17 year old Laborer, living in Dystopia America. Wanting to escape from her inevitable future of living a life of servitude to an abusive Master, she assumes the identity of a young boy and enters the Savage Run; a range of obstacle courses set to kill where thousands of boys enter in the hopes of surviving and winning freedom.

Witnessing the murder of her best friend, and her gender being discovered before she enters by the oppressive ruler's son, Heidi realises the gravity of her quest. But she manages to trust him after he indicates traits of rebellion about the whole system, and an unexpected friendship blossoms.

Heidi must battle against obstacles set to kill men, nevermind an undernourished female, and other participants that want to beat her. Heidi finds that no suffering she has endured up to now, has prepared her for her fight for freedom.

I took a break from YA Romance novels and wooooooow! This reminded me why I love Dystopian stories. Although similar to The Hunger Games, it still gripped my attention and was such a good read- completed in the one day!

Characters: Heidi was a great heroine, probably one of my favourites. She's persevered through so many obstacles already in life and still has the courage to attempt to save her friend and risk her life against the odds to make one last fight for freedom. Poor Gemma was clearly run down from her time serving Master Douglas and resigned to her bleak future, exactly what one would imagine the mind would reduce to. Nicholas...ahhhhh. I'd love a side story from his perspective growing up in this new world, living under his father's rule whilst despising it. I loved his subtle actions to help Heidi and give her some tips, without it being too much or over-powering to believe he'd help her.

Setting: Most futuristic settings written about are depressing and negative, hence it's a dystopian world. I loved how this one was set in America with Europe and Asia as one in the East, as it made it easier to visualise on Earth rather than some fictional land. The classes were well distinguished and interesting to have sectors even within one class. The bits of history all included to give the reader a better concept of how the world became what it is really helped make it believable and realistic.

Plot: Apart from being furiously upset that the book ended - aaaaagghhhh - the plot was so gripping! One could argue it's relatively predictable but I don't believe overly so. The obstacles were intriguing and how Heidi had to face battling and defeating them and how they did tackle the body and mind. I don't care if people brand this as jumping on the Dystopian band wagon as this still had a lot of originality and deserves its own recognition and praise.


I can't recommend this enough to everyone. It's a definite new series favourite that I can't wait to continue. The pacing and plot were so captivating and inviting and to finish a book in less than 12 hours should be reflective of how much it sucks you in!