REVIEW; Death of a Dapper Snowman, by Angela Pepper 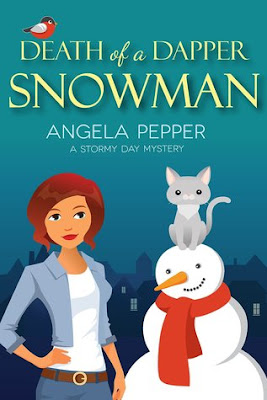 Stormy Day returns to her home-town of Misty Falls after cashing in and leaving her boyfriend. Minding her father's house as he is in hospital, Stormy tries to blend in to avoid being gossiped about. After spotting a "Dapper Snowman" in her neighbour's garden, she opts to take a selfie- but discovers more than she ever imagined.

Her neighbour is the frozen body acting as the snowman's skeleton, and Stormy is thrown in to the mystery behind the murder. Opting to undertake her own investigations when her father is a suspect, Stormy does her own digging to try and pin the murder on different citizens of the town.

Soon though, Stormy realises she has gone too far in her questions, and has put herself right in the line of the murderer.

When I began this novel, it wasn't looking like I'd complete it. It definitely has a poor start and doesn't really hook you. However, it does improve and I am happy to say I easily finished it and mostly have pleasant things to say.

Show Not Tell: Right, this annoyed me immensely. The author was insulting to the reader by presuming we could work nothing out for ourselves- so much so we had to be told the main character was sarcastic and witty...


"I wouldn't call myself a snarky person, because I never mean to be cruel, but I do serve up a number of sarcastic quips each day. Whenever people are being ridiculous, my instinct is to make a joke and break the tension."

The reader does not need to be told this- this isn't something you'd say if you were introducing yourself. I know I'm fluent in sarcasm, but I can't help it and often bite my tongue, but it wouldn't be something I'd say on PAGE 2!!!!! of anything about me. Every minor joke or attempt at humour basically had a big luminous arrow with "LOOK- A JOKE! FIND IT FUNNY AND LAUGH!!!!" making me just hate the character and not find it remotely funny. Humour is prime with its subtlety - treat your reader as if they have a half a brain, thanks.


" 'Is your cat broken?' She laughed at her joke, then quickly added, 'Just a little veterinary assistant humour to lighten the mood for kitty.'"

Characters: I didn't think the characters were really thought out or developed much. Stormy was all over the place; didn't feel like I could predict her actions or replies and it seemed like she was just constructed with the flow of the novel rather than properly figured out prior to writing. And Logan? Why was he in the vets when he first met Stormy? He was renting and there was no mention of any pet? And there was no chemistry what-so-ever between them. None. Nada. Zilch. No romance and yet she was oh so overwhelmed by him that she couldn't return to her home in case he saw her but she spied on him through his window... whatever.

Writing: The writing was fine. There were little to no mistakes but it was very bland. There were no fancy pancy high-end word choice. And this was a massive fail - the protagonist is meant to be some great business woman... which would suggest in my mind that she had some sort of ability to construct adult syntax and reactions. The writing did not reflect that of a character with her background and/or age.

The Car: Something that has reallyyyyy bothered me is that her "high end pricey car" was a BMW... Okay- now I'm a car girl, I'm studying automotive engineering and I understand that to many a flashy expensive car may appear as a BMW so often I overlook the many incorrect information included in YA/NA novels about vehicles. But c'mon!!!! BMW's are so common that Logan would not know the only person such an expensive car could belong to was some successful known business woman. At least give a new luxury model of BMW to highlight the difference. Even I, as a student, could afford a second hand BMW so, it's all in the detail although I'll accept that's a petty aspect that probably only bothered me personally...It's just this sort of hazy writing that doesn't make it believable...

So, as for the redeeming features of this novel?

I need to judge it for what it actually is and not be too harsh. It's a light-hearted cozy mystery that probably is trying too hard to be humorous. It is an easy read and not really anything that memorable but does a good job of breaking up the reading of heavier novels.

Some people probably prefer these type of books and don't care for details nor do they tear books apart. Although anyone could probably guess who the culprit was, there was a good bit of suspense and suspects that could be plausible murderers.

I was going to give this two stars but that'd be rather harsh so it reasonably deserves three. I know I can be quite mean at times with certain aspects but only as I have pet peeves about particular things. I'd still recommend this as a good easy read for escape purposes - but not really funny.