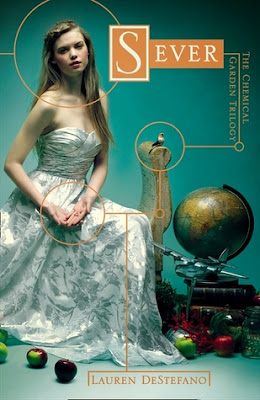 In a future where a virus means women die at 20 and men at 25, researchers are desperate to discover a cure. As young women are bought to marry and reproduce, in the hope of providing a future, Rhine found herself under the evil rule of her Father-in-Law, Vaughn.

After escaping, she now finds herself back under his control, but seeks refuge with his brother, Reed. Ever desperate to reconnect with her twin brother, Rowan, who is leading the rebellion against the experiments, Rhine will stop at no cost.

But her brother believes she is dead and Vaughn will stop at nothing to have Rhine under his watch to experiment on. As her husband Linden and sister-wife Cecily stand by Rhine's side, all of them are put into danger as this trilogy wraps up.

I have no idea why, but I've owned this book for about a year before getting round to reading it.

As soon as I started though, I fell back in love with everything; the characters, the story, the writing. I've read some of the negative reviews already posted, and in some ways I agree but I've still been won over.

Rhine: She can be utterly frustrating at times, e.g. when reunited with Rowan and she doesn't tell him about Vaughn immediately. Or just being a sitting duck but yet she's meant to be so desperate to escape Vaughn... but then again, I'm reading this with the mind of a 20y/o so technically I'd already be dead in this world. She's young, inexperienced, thwarted into this world that's fighting against her and against powers she can't battle. So to those reviewing negatively against her character, I have to disagree. All characters have flaws in some way and Rhine's are simply down to her young age- she is only a teenager at the end of the day. With this in mind, I think all of her unwise (idiotic) choices are justified. Heck, I know I wouldn't function if having been through what she had- I'd have long given up.

Rowan: Right, now this guy- me no like. He has been glorified for 2.5 books and when she finally finds him he is a... douchebag? I expected more of a connection between them and that he'd trust her but he moddlecoddles her and tells her that Vaughn can be trusted and all that rubbish. He's frustratingly thick and he really let down Rhine... She would've been better off without him. Again though, maybe it added to the book that he was a disappointment as it was the story...

Linden: Hrmmm... Strange guy this one. I admired his care for Rhine but like, he clearly loved Rose but then sort of pawned all this caring nature onto her.He doesn't believe what she says about his dad but then helps her go against him... But, I feel he was sort of trapped. He wasn't the bad guy and only had his dad so wanted to believe the best in him and stand by him, but also saw the suffering of his wives which he wanted to help come to an end. It probably would've been more beneficial to write a little more to express this battle rather than having him just flick back and forth.

Story: I'm in love with this whole story. I thought it was a very unique take on a dystopian world and it was easy to read. Whilst it wasn't a happy world, it wasn't robots and a world of darkness and zombies and the like. I would've loved for Gabriel to have returned a little sooner than when he did, just to have more of a romance between them. At times, it did lull a bit as Rhine decided what she was going to do. But I felt overall it was a great culmination of the trilogy and still had adequate suspense and action to warrant being a stand alone book rather than just an ending.

I'm sad this series has come to an end but it was a thrill to read. It'll always remain one of my favourite series and I hope people pick up the first one and give it a shot. I love unique ideas and this was definitely a trilogy of originality. The books weren't painstakingly long or boring and I wouldn't change anything. Also, bonus points for probably having the nicest book covers ever!!