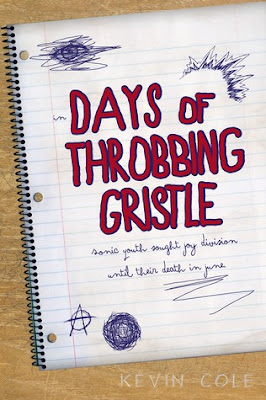 Sam Henry Hay is a 17yr old from Sheffield, who visits Texas in '87 as an exchange student in the hope of furthering his opportunities. Planning to swoon his American "Parents", he hopes to be able to swindle them out of as much money as he can whilst being the perfect addition to their family.

Sure of who he is and where he is going, he meets people all around who he views as manipulative opportunities. He knows exactly what to say/do to please them, and get what he wants.

Somewhere along his way, he realises he hadn't figured himself out as well as he thought, and everyone he has met has in someway changed/affected him. Now he looks at himself wondering if he classifies as an American, and lost himself in his journey...or has he finally found himself?

Ah, where to start!

Characters: The main character of Sam is an interesting one; he's extremely unlikable but hilarious to read about. His constant wit and sarcasm draws the reader in and one can't help but laugh at his manipulative abilities. He has such a great reading on everyone he meets, but yet can't figure himself out at all- something I enjoyed reading about as I think the majority of teenagers can relate to this. Although Sam documented each character he met in great detail, they all had enough idiosyncrasies to identify them. They all felt real and didn't necessarily have something huge attributed to them, so they could be related to as your everyday group of people. I also liked Heather; crazy in rebellion, I felt her presence helped refresh the heaviness of everything going on.

Emotion: When reading this I didn't think I'd feel much ups and downs. It all seemed either funny or just interesting but there were moments of sadness intertwined that added another level to Sam. He spends so much time presenting himself as one thing, it was interesting to read the visit he made to Glasgow with his sister to visit his parents' graves. It really helped solidify Sam as a real person who'd suffered trauma before arriving in America and presenting himself as a cold badass.

Plot/Story: I enjoyed reading Sam's journey. At times it lulled but I'll get into that after. I wasn't too sure what the story would actually involve from just reading the blurb but it was Sam documenting nearly his first whole year in America. It was great to see the clash of English/American use of language and slang and subtle cultural differences. There were a lot of apt references to make the 80's setting concrete, such as music and current affairs. Although, I wasn't around until 90's, I'd say a LOT of references went over my head, but from the little I did know, the inclusion was appreciated.

Pacing: This is one slight negative for me. I enjoyed reading a book that was of decent length however at times the story lulled a fair bit. I enjoyed the in-depth nature of Sam's recount, but some of the stories were hard to trudge through when they weren't really relative to the story. There was one chapter that was the one paragraph for pages and reading that many pages of chunk of text is quite trying. That aside, for the most part it was well done, with a gradual incline to the climax rather than rushing through bits.

Writing: I can't fault Cole's writing in this. Aside from some typos that are to be expected with ebooks, his technique is captivating. He has a sort of modern classic take and I loved reading a book that had words I had to look up!!! Nowadays so many novels are written with basic language whereas this was a challenging read. The ability to write in such a chaotic mindset for over 800 pages has to be congratulated.

Content: I enjoyed the constant debating in this. Harsh offensive jokes throughout that one has to brush aside, knowing a 17y/o male is not going to be sensitive, and certainly not Sam. The religious, homophobic and general sexual debates reflect similar to what is uttered today. At times, I got a little tired reading the Donna/Eisenhowers religious debacle and Jill preaching to Sam. I suppose religion is an old age argument and as I'm one of a passive nature, my personal patience on the topic has long since expired to read/listen/see religious sides argue when both parties are stubborn in their ways. Aside, the other themes are all relevant to a coming of age story.

This is a thrilling and whirlwind of a coming of age novel. Focusing on current topics although set about 30 years back, one can easily relate to the pressures and chaos of teenage life. One I think should be studied in school instead of dated classics, which hold no relevance to today's youth. Although one needs times to read, it's definitely worth it.


Thank you to the author for providing me with a copy in exchange for an honest review.