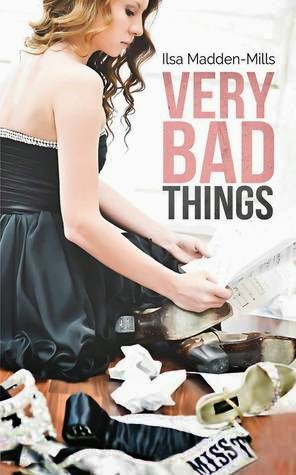 Nora Blakely is a model member of society. Brought up in a life of luxury she follows her mother's rules and sticks close to being the daughter to be proud of. But just before her 19th birthday she snaps, and abandons her life of privileges.

Nora decides to make a list of what to do to be "bad" and redefine herself. Along the way she meets her soul-mate, but he doesn't want her. Leo Tate is 25 years old and doesn't have time for love, never-mind with someone 6 years his junior.

But yet he can't seem to get her out of his head and every-time he tries to push her away, she bounces back into his life as he tries not to break her heart and as Nora deals with the demons of her past.

Reading the blurb of this on Goodreads, I really thought this would be a quick and enjoyable read. Something right up my street... sadly though, I was disappointed.

Nora: I liked her at the start; I admired her defiant nature and her bravery to rebel and stand up for herself. But she soon became a pathetic idiot. She kept throwing herself at Leo despite him being quite blunt he didn't want her to begin with. Even though he kept hurting her, she stayed around and still tried. So you could argue she knew he was her soul-mate, but I didn't feel their love was real. I couldn't warm to her character once she got drunk and ended up at his house.

Leo: He was a mess too. I'm tired of reading of the troubled playboy who doesn't do love and then meets The One and can't understand the feelings he has and how beautiful she is without makeup or without even knowing.

"She wasn't a classically beautiful girl, or maybe just not the kind of pumped-up pretty I'm used to seeing at Club Vita, yet there was something compelling about her that had gotten my attention"


He then kisses her and is surprised when she utters the word "love." It's been pretty clear from the get-go she believes she's in love with him!


Insta-Love: Oh my pet hate creeps up again. As soon as they laid eyes on each other they were head over heels, even if one tried to deny it. But as the story continued there was no reason given- there was nothing to solidify their romantic connection. Everything was just "soulmate soulmate soulmate" and heated looks FOR NO REASON! Now, whilst I do believe you can meet someone and have instant connection/chemistry, there still has to be other factors to love them, and there wasn't even any chemistry between them.

Teddy: I was quite shocked as to how the writer/Nora referred to Teddy. Authors have the ability to really influence the thoughts of the reader and it felt that Nora's ignorance was archaic and insulting.

"I'm just surprised that you chose him for your band. I'm sure he's worth all the extra work."


"...Teddy for his band because he liked imperfect people."


Oh. My. God. So Teddy has autism- great to have a character with a disability in a YA novel, right? It can help really educate young people about how these people ARE NOT TO BE TREATED DIFFERENTLY AND CAN DO WHAT WE DO, right? (Aside from things that directly are impeded but that just because someone's legs don't work doesn't mean they can't sing type of thing.)
But no! Instead Nora points him out to being hard work to have in a band with a snide remark and then claims he's imperfect!! IMPERFECT BECAUSE HE'S AUTISTIC, ARE YOU FOR REAL!? Why can't an autistic person be in a band? How does autism affect a musical talent? This happening early on actually spawned hatred for this book.
I was just shocked, even if Nora was meant to be ignorant on autistic people or whatever, Leo did little to correct her and there was no chance to educate her or the reader. This portrays that everyone without a disability is now to be labelled "Perfect" and those with one, are now "Imperfect." It's sickening. So congratulations Madden-Mills on shaping the minds of the young so brilliantly.


The story in general lacked direction. It was just a whirlwind of rebelling Nora in a pit of self-pity and Leo being an ass the entire time. There were also numerous typos, including a mistype of Sebastian's name on one occasion.

This was a wreck. Got worse as I read on and I couldn't bare to complete the novel. The way Teddy was portrayed was hurtful and I can't remember/find one redeeming feature about this novel. It would've gotten two stars if Teddy hadn't been labelled "Imperfect" but that immediately set this off badly. Do not recommend to anyone that enjoys a good book. Find something else.