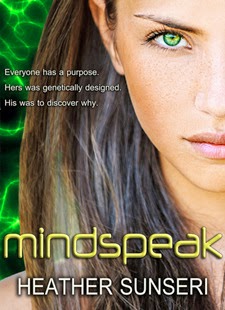 Lexi Matthews is 17 and an attendant of an elite boarding school where all the students rate secrecy quite high. The daughter of a leading genetic scientist, her relationship with her father is far from perfect. Lexi can also influence minds but at the cost of always getting a nose bleed.

Jack DeWeese is a new student but also the son of her father's ex lab partner. He can heal, such as Lexi's broken arm, but he suffers from sickness following. After waryingly befriending Jack, Lexi discovers the death of her father and receives threats that put her in immediate danger.

Attempting to discover more about her past, she uncovers secrets about herself and Jack and is thrown into a whole new world where she is left doubting if she can trust anyone- even those closest to her.

My Thoughts:
I definitely wavered between a 3 or 4 star rating for this as there were some extreme strong points but when broken down there are a few negatives...

Positives:
The writing style is brilliant and such a great read. It's succinct and descriptive to a good degree and draws the reader into Lexi's world quite effortlessly. There aren't too many repetitive phrases or stand-out words, with the novel incorporating an extensive vocabulary.

The characters are all pretty quirky and dynamic, albeit stereotypical- Briana the flirty nemesis, Jack the hot new guy- but they all had personalities that gave them depth and realistic qualities.

Genetics is one of my favourite story-lines so to discover it in a YA novel was such a treat; I love more intelligent inclusions like this to really stimulate the brain and open up minds as to what could be scientifically possible. I wasn't such a huge fan of Lexi's take on viewing herself as an abomination and against God etc... I know it's a controversial issue with designer babies becoming more of a reality, however at times it seemed a bit insulting to the scientists in the real world that are making this breakthrough advances that could be used for the greater good, e.g. eliminating genes with disease etc. But regardless, still an interesting take on having genetically modified clones with healing abilities.


Negatives:
The pacing definitely felt a little all over the place with this. There were good moments of suspense but often the case I had guessed what the "plot twist" was long before it hit Lexi. Then some vital or intimate scenes were too fast and I felt needed more developing time to split up the constant drama.

The romance lacked a lot in this sadly. Although it may not have been a forefront theme, any intimate moments with Jack went as far as "his lips touched mine" or some variance. And yet from these mere shared pecks Lexi and Jack claimed to be in love...

Really. Can't. Stand. Insta. Love. Especially. With. Teenage. Characters. In. Every. YA. Novel.

Seriously, what is with it? There was no evident connection or chemistry between Jack and Lexi and this was a huge flaw for me. I didn't believe they loved each other, or really even cared. It was just words. Lexi had not dated anyone and somehow she fell for Jack even though he just kept leading her on with promises that he'd tell her everything- soon- and then make up more excuses. He definitely isn't in my list of Book Boyfriends.

Whilst I enjoy a little bit of a cliffhanger to suck you into reading the next in a series, this was too unfinished to warrant it being successful. I'm undecided as to whether I will read the rest of the series as I think in this case it's for younger YA's than myself. The ending was left too open and nothing had really been resolved so it felt like it ended mid way rather than concluding 80% but leaving a little to intrigue.


This was a predictable YA novel however I still enjoyed the story overall. Although it had some issues that dropped its rating, there is a great theme and plot surrounding genetics. If the romance element was executed to a higher standard (whilst still remaining suitable for targeted audience) it would have definitely scored a 4.