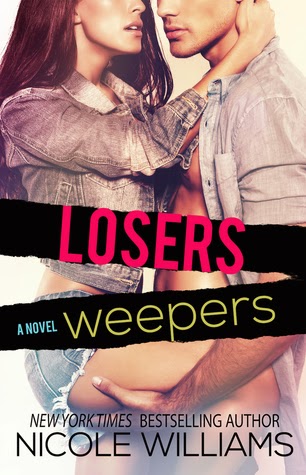 Garth Black has finally accepted love in his life and is on his way to building a better and brighter future with his girlfriend, Josie. Competing in the Bull Riding Championships, Garth has positive prospects to earn a lot that'll set him up. Just before proposing to Josie, tragedy strikes that puts their future in jeopardy and changes Garth's life completely.

Feeling that, once again, Garth cannot give Josie the life she deserves, he attempts to prove that he is not deserving of her love. Both are sent into a battle of emotions and feelings and who can defeat the stubborn Garth Black.

My Thoughts:
I feel bad only rating this two stars but it was not up to par with the previous novels and I had them at 3 and 4 stars.

Firstly, I absolutely love Nicole William's stories and her writing.
I've raced through the Lost & Found series and have fallen in love with Willow Springs and all the characters. So where did this fall down?

Garth. Aaahhhhh! I wanted to shoot him at times- he was just so frustrating and the self pity was NOT endearing. Whilst it is an expected/common response for someone that's endured what he has, for his character it didn't fit. We'd already been through 300 odd pages in Finders Keepers of him shutting Josie out and pushing her away, after being through the same with Jesse and Rowen, so at this stage it wasn't going to go well.

It was the first time I found myself fast-reading the story to just pass by a lot of it. A lot of it morphed into one scene rather than many changes. The only stand out scene for me was the meeting of Josie and Garth with Jesse and Rowen at the restaurant - and that was possibly because of Jesse and Rowen being back.

Drama and heartache was to be expected but for some reason it just didn't get me this time, it just irked me. I think it would have been better for Garth's wake up call and change of attitude to change sooner and focus on different things, than his depression drag on and on as he hurt Josie. It was the first time I felt the characters had lost themselves as Garth just seemed like a whole new person and I didn't understand how easily he gave up on Josie- especially after all the drama in Finders Keepers.

Overall:
Whilst only giving this two stars, I would still recommend it to those that have read the prior three novels. It is a relatively enjoyable read but it simply frustrated me following the drama of the previous three installments to their story. The repetitive sense and reuse of emotional actions concluded to a dull read.