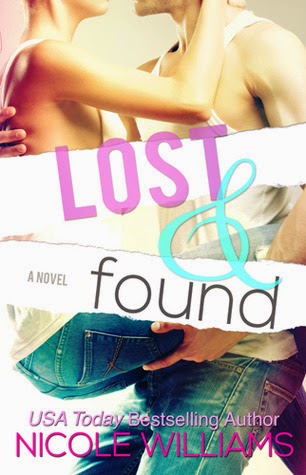 Rowen Sterling is on a Greyhound Bus to Willow Springs Ranch, in the middle of nowhere, to work for the summer to prove to her mom she deserves to go to the Art College of her dreams. Covered in dark clothing and make-up, Rowen has self-defence walls built high and strong around her. Collected by the ranch owners' son, Jesse Walker, Rowen is surprisingly attracted to the tight jeans and boot wearing cowboy but is determined not to let him in.

For the first time she gets a glimpse as to how it feels to be a part of a family of love, as she falls for Jesse at the same time. In attempts to keep him out of the train wreck of her life, Rowen only makes Jesse more determined, as he's more familiar with her situation than she thinks.

But every time Rowen believes she is strong enough to trust Jesse and allow herself be happy, the world has other ideas.

My Thoughts:
I've read books by Nicole Williams before so knew I'd love this regardless. I love her style of writing and character execution. There were definitely some pros and cons to this book though.

Cons: Thankfully there aren't too many issues I had with Lost and Found. The main downside to it all is how Jesse and Rowen fall in love. I can understand the instant attraction from both sides; both are different to what they normally go for- Rowen is overwhelmed by Jesse and his quirk attitude and Jesse is intrigued by Rowen's humour and self-defense. However, there was no real build up or increase of chemistry between the two. Apart from the laundry room scene, Jesse just jumped the gun asking her out and Rowen fell for him. The insta-love thing is just one of my pet hates and if there had been a little more before they fell for each other, it would've been so much better.

There was a good bit of predictability with the story-line too. The Jesse/Josie/Garth saga was all too obvious and Garth was just bleh. Rowen of course jumped the gun and got the wrong impression of what was going on with Jesse and sometimes her self-defense spiel about pushing people away was a little too much.

(The ending was a little sudden/quick, but that's not too bad as there are more books in this series for their story to continue on)


Pros: On the other hand, there were a lot of pros to this too! All the little gems of wisdom from Rose and Jesse were actually really enlightening. The majority weren't the usual responses and some have really stuck with me.


"Don't waste your time trying to be someone else. Just be the best you you can be."

That quote in particular really struck a chord with me and it's been one of the first times a "chicklit" romance novel has gotten to me.


"We don't deserve anything, Rowen. We don't deserve punishment, we don't deserve happiness, life owes us nothing. Realize that." His voice wasn't gentle anymore: it was as strong as I'd ever heard it. "So we have to take what we want because life sure as shit isn't going to freely hand it over."

The raw truths that were spoken about life and self-treatment throughout really hit home with me. Some of these have just acted as such an epiphany for my outlook on life and I feel I've read this at such a great time in my life.

Rowen was a great heroine. A breath of fresh air. She knew who she was and wasn't out to impress anyone or hide who she was. She wasn't the usual heroine of being naive and shy and doesn't realise how pretty she is etc who gets the most wanted guy around. She just seemed so real and she was definitely someone I could relate to. Her story really highlights how no matter how many walls you construct, you can meet someone worth knocking them down for. I only hope I can meet my Jesse.

Jesse... ooh la la!! I'll start by saying I love the book boyfriends from Williams' mind. Jude Ryder  from Crash is one of my favourites and Jesse really lived up to his standards. He's just so suave and cool and has a wicked sense of humour, but he is proof you can have had a rough life and beat it. Your past does not define you and that's one thing that I've really learned from this novel and his character.

It was just such a beautiful read. Rose was so lovable with her mothering nature and love for Rowen and she really is a kick-ass woman!

Overall:
I would so recommend this to any romance/drama lovers. Nicole Williams really has lived up to my expectations from reading Crash and there's just such a great balance of love and heartache in her novels. I want to continue their story so much right now that I've bought the second one and about to get started!