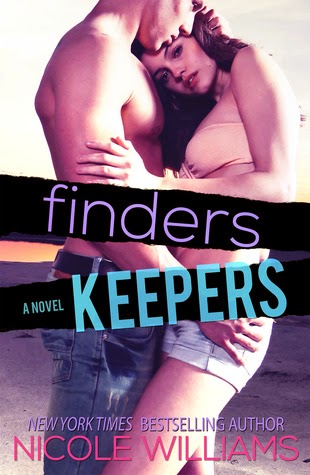 Focusing on Garth Black, the bad boy from Lost & Found, his life has fallen into the "easy" or "happy" category. Steering clear of any form of love, he has dealt with everyone in his life with a cold and defensive wall in place. Getting close to anyone means getting hurt.

Following a tragedy Garth is forced to be around the one girl that makes him doubt everything about himself, the girl who gave him his first kiss of any kind, the girl who was the only person to ever show him kindness, the girl he is slowly falling in love with- Josie Gibson.

Add in drama and chaos that's synonymous with Garth's life, will he accept her love or do what he knows best, and push her away?

My Thoughts:
Hrm, so I was slightly disappointed this was marketed as the 3rd book in the Lost & Found series but was focusing on Garth rather than Rowen and Jesse- I was excited to read more about their story.

However, Garth's story was a truly heart-warming read. He was still the cold and hard bad boy from the previous two stories but with an adequate insight into his mind showed his way of thinking. Nicole Williams has a great way of depicting characters in a different mental light, and they're immediately distinguishable.

Whilst I love Jesse (and prefer him), one can't help but fall for Garth but in a different way. You really feel for him for his upbringing and how he goes around with such a stereotype attached to him that sets everyone against him, and still he manages to stay strong.

One really has to admire his determination though; after being left alone and homeless, he still stays true to himself and dices with death - all to avoid being close to Josie. This novel depicts so well the cyclic nature of being stuck in self-destruct mode and being unable to allow yourself happiness and love. It reinforces the message in the last two books about deserving people and it not being down to deserving someone's love but just accepting their love.

In saying that, it felt slightly repetitive too from the previous books; the traumatic childhood story and the mental barrier to accepting true love, regardless of what you believe you deserve. It seemed at times a rehash of Rowen and Jesse's story.


Overall:
This was a great dramatic read, but it did fall slightly short for me. A little too predictable and repetitive for my liking and at times too stereotypical as well. Still a brilliant book and I look forward to going on to next installment!