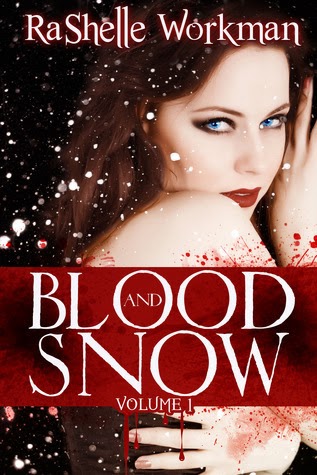 Snow White is living in our modern world in Salem. She has her cat Gatsby and is best friends with 7 guys. Resembling the fairy-tale Snow White, with her pale skin and dark hair, she is being forever teased, and when she meets dashing Chase Charming, he understands her pain.

Just before she turns 16, she falls unconscious, only to wake-up changed. Snow is no longer human, but also not a full vampire. She was bitten by The Hunter who was sent to change her into a revenant.

Ohhhhhhh dear. I was quite excited to read this as I really love the modern takes on fairy-tales and sadly I've to admit that whilst I completed the first novella, I failed to finish the volume of them- which is quite rare for me.

To kick this off-

These things are all present quite early on which just put me in a bad mood with the novel before it even had a chance. I DESPISE these aspects in YA novels- they're in everything and not interesting or endearing. Just no! Please authors- STOP!

As I didn't complete this I've no idea how great it ended up being but the whole vampire/fantasy stuff started off pretty suddenly. It seemed bearable to begin with and I was looking forward to how the vampire story would be integrated into everything... Didn't expect it to hit like a 12 tonne freight lorry.

It was made worse by everyone's reactions to it; those who knew and those who'd no idea and how "special" Snow was meant to be.

The writing was all over the place as if words were thrown on a page to fill space. Describing an action like the following:

"He grabbed a set of keys off a hook on the wall that said, coincidentally, KEYS."

Random actions of romance or flirtation thrown in to "hint" at feelings:


"Pressing me closer, he said, 'You aren't always going to think of me as a brother. Someday, Snow. You'll see me the way I see you."

Just no. Not even going to begin with the punctuation but no guy would ever say that to a girl with no prompting and Snow must be so thick if she can't comprehend what he means. It all just appeared fake and as if written by a clueless child trying their hand at writing.

The first "book" ended so randomly, it all could've just been an introduction. It was too choppy between subtle romance, new guy, vampires etc.

As I didn't manage to complete all the stories, I can't really give much feedback, other to not enjoying what I did read. Maybe I'll give it another shot in the future but for the moment it's remaining unfinished. Cliché after cliché.