REVIEW; Down the Wormhole, by Ana Franco 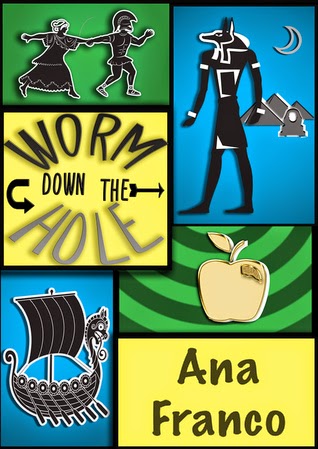 Seventeen year-old Kitty arrives to live for a year in the orphanage. Here she meets other teenagers, Natalie and Anna, and Thomas and Andrew across the road in the orphanage for boys.

However, they're not normal teenagers but Gods from another world, like Medusa and Amergin, hiding in today's reality. Soon, Kitty finds herself swept up in their worlds and fighting a magical battle against other evil Gods whilst also discovering love.

It's been difficult to formulate clear thoughts on how I want to review this novel. There were some definite pros and cons throughout so I'll just split it up that way...


Negatives (to get them out of the way!):

I don't want this to be a negative review, and any negatives I hope came across constructively. I really want to see this novel and Franco do well and I think she's achieved a lot in publishing this piece of work. I'd say the main improvement is just to analyse the pace and pad out the dialogue slightly, whilst also really knowing the characters and what drives them. This would easily be a 5 star novel if those two aspects were improved.

Thank you to Ana Franco for allowing me to read this in exchange for an honest review.