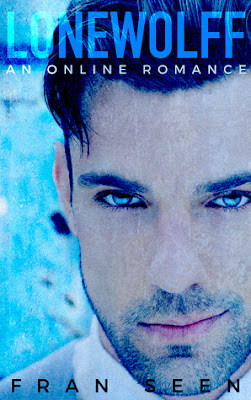 Ellie is a social outcast and turns to online forums to be who she cannot be in real life. Adopting different personas to everyone she speaks to allows her to be someone else for some time, but always ending the charade after a few hours.
But after speaking to LoneWolff, Ellie sees an opportunity to be herself with someone - but only to an extent. Out of fear of losing her only friend, Ellie fabricates crucial details and embellishes others to keep him interested, and so begins a friendship that'll last for years.
Fast-forward to when LoneWolff has uncovered the web of lies Ellie fed him and the computer screens are removed, can their relationship triumph or was the deception too much?

Oh. My. God.
I think everyone should get to meet a LoneWolff!

The blurb of the book doesn't give too much away, and really only hints at the backstory that is revealed to the reader early on, so the story itself is a mystery waiting to be uncovered.


Ellie: Although I'm not a fan of lying, I totally fell for Ellie and understood her reason for lying with LoneWolff. Her lies weren't out of malice or hate. She usually had one conversation only as one person to another before deleting the profile and moving on and I can understand how this was her only sense of escape. Don't we all wonder what it's like to be someone else? And she wasn't hurting anyone in the process... of course that was until she met LoneWolff. She tried to be herself as she simply wanted to be accepted, but knowing the age difference between them, the chance of having someone truly know her would be severely decreased. In a limited amount of pages, there is still some super character development and as Ellie grows from 15 to 21, we see such a transformation - even from how her confidence changes when she finally gets her braces removed. She has a mix of such a caring heart, basing her decisions on what's best for her grandparents, but also immense independent and drive - all that strength and power she showed in New York and standing up for herself.


LoneWolff: ASDFGJHJKL Um... Ellie is a lucky girl. He is so dark and mysterious but not in the conventional "bad boy" way you normally get in stories. He had so much depth to him, even before we met him. His anger at Ellie was palpable and his extreme emotions added to the mystery and allure. His cold and aloof office persona backed up the connotations of his username and his clever manipulation of Ellie was just masterful.


Story: I felt there was so much in this despite it being a novella. There was each individual story of Ellie and LoneWolff and their past. There was the years of their relationship being built up through their online conversations and then their story developing in the present - which was so so so endearing and exciting. I enjoyed how it also wasn't mostly a happy/love story. There was drama and heartbreak from the beginning and it was a remedy journey of sorts.


Writing: As like in Blackbird, I love the writing in this and how scenes are depicted and presented. The language is evocative and usually quite humorous as well.

"Oppressive heat, combined with the aroma of livestock, was a recipe disgusting enough to gag a maggot."


There's also some good words of wisdom woven throughout. I paused a few times after reading things, usually said by Mr Wolff, realising the truth behind them. I feel there's such a depth and substance to the writing that goes beyond a simple romance tale.


"What people will say about us, none of it matters. Don't prioritize other's opinions above your own."


That was something quite poignant to read and to mull over!

This is the second novella I've read from An Online Romance series, and it's surpassed my expectations - I felt it was miles ahead of Blackbird so really this should get more than 5 stars! I fell completely in love with Ellie and LoneWolff's story and I wish there was more to read about them! It's simply kickass with all the elements that make a great story - only condensed. A must read.