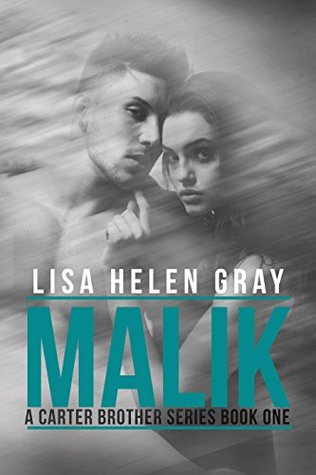 Harlow Evans has moved into her Grandmother's following the murder of her parents. Next door, 5 boys live with their grandfather - The Carter Brothers. On her first day at her new school, Harlow makes an enemy who will stop at nothing to humiliate and ruin her life.
One Carter brother, Malik, claims Harlow as his, as they all fight to protect Harlow.

I really don't know where to begin. The amount of notes and highlights for this book surpass any other - and not in a good way.

Writing: I appreciate self-publishing and love that it's becoming such a huge thing. But come on! At least get an editor of some kind. It's known you can't self-edit as you read what you expect to have written and not see it for the first time, but the standard of writing in this is abhorrent. I was honestly so shocked, especially as it is so highly rated and yet very few comment on the grammar. There are no typos (congrats on using spell check) but the grammar is horrendous.

"Myles goes back to reading his health and social workbook, and go back to the laptop." - Yep, makes sense...

"No one has lived there in over eighty year's" - It should be "years ", without apostrophe due to it not being possessive. (If it were, e.g. "she had eighty years' experience)


"he turns to study his food, with his one hand resting on my thigh" - using "his one" suggests he only has one hand and it doesn't read well.

The author clearly had an aversion to commas; none would be used when using a name e.g. "What do you want Craig?" and it should read "What do you want, Craig?" It's vocative case and therefore is separated from the direct address!! This error was ALL THROUGHOUT THE DAMN BOOK! I learnt a lot of punctuation rules from reading alone, and then a little research over the years for essays and further understanding - this should be a basic trait picked up by the author if she actually reads!

Also would be good if the headings weren't left as Word default - really added to the unprofessional nature.

SHOW, NOT TELL. The unwritten rule of writing a good story, yeah? You plant ideas in the readers mind to leave them to piece together feelings, or emotions... or jokes!


"The name sounds like bust-her-cherry and not Buster Cherry"

Thank you, for pointing the joke out. Would never have worked it out myself.

Harlow: What an annoying heroine. She appeared to only be affected by the murder of her parents when it suited her. Day to day life - there was no grieving whatsoever! She also happened to be a curvy, hourglass girl with brown hair and blue eyes... an hourglass figure which APPARENTLY all boys despise... um... what? Then to add to her innocence of ignorance, she never wore makeup!!! Oh, Em, Gee! A naive, innocent, poor orphaned 17 year old virgin, who is soooo beautiful and doesn't know it, but doesn't even attempt makeup as her parents said she didn't need it. Sorry, but if a teenage girl is insecure about how she looks, she will try makeup to boost her confidence, regardless of what her parents say...

She also did my head in regarding her relationship with Malik. I get the whole being scared to trust shit, I'm the least trusting person there is, but I wanted to smack her. She was so dense she believed BULLIES WHO HATED HER over her boyfriend. Like, they've tripped you up, humiliated you countless times, and yet you still believe what they say about the guy who has been by your side since day one? Whatever.

Carter Brothers: Now, there is a great opportunity for the series here- five insanely hot and witty brothers and their individual issues blah blah, wonderful. But 5 of them? And all 5 of them good looking and well built? Maybe 3 would've been realistic but I felt like I was reading a story from a teenage girl's fantasy of the perfect scenario. Oh, and all having names beginning with M? F sake.

Insta-Love: Christ on a bike. THERE WAS F ALL ROMANCE IN THIS BOOK ANYWAY! Day one, and Malik just CLAIMS Harlow, and this is meant to be absolutely breath-taking and romantic?! WTF? There's no emotion or build up to their relationship (not to mention zero chemistry) and Harlow flips from being a scared little virgin to a flirty daring minx as quick as the wind changes. Come on.

Bullying: I think authors have great power in what they write. Books often provide solace for struggling teenagers and therefore triggering topics should be presented well and dealt with carefully. It was all over the place here. It was all just used to propel the plot, with no real emotion behind it. Even rape was included and not very respectfully.

Why were Harlow's parents murdered? Why did the murderer come back to kill her? NONE OF THIS WAS ANSWERED! I'm surprised it wasn't the classic death by car crash. At least you aren't left wondering why they were killed. A murderer returning to kill the daughter would suggest more than a mugging or random killing. But nope. Never got to know any of that.

The story read like it was set in America. Even the names. Malik/Mason/Maverick/Myles - kind of all American names! There was some American english/terminology used too. The only giveaway to the setting was once or twice Pound Sterling currency was mentioned.

I think maybe YA would enjoy this more, as it all plays into the perfect fantasy of damsel in distress being saved by 5 guys.