REVIEW; At The Stars (Evergreen Grove #1), by Elizabeth Staab 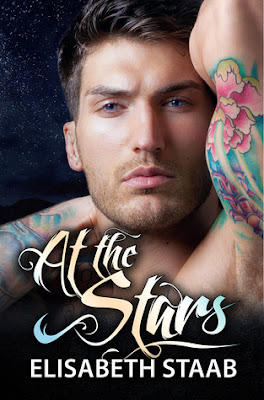 Cassie up's and leaves her home town to escape, following the death of her mother. Leaving everything behind, she finds herself in Evergreen Grove after her car broke down in the middle of a rain storm.
Jake saves Cassie from being run over by a truck in the middle of the same storm, and instantly forms a sense of duty to look out for her, feeling like he has been given a second chance at being a good person.
But both have pasts and secrets and their own demons to deal with, but can they allow themselves a chance at love?

This is a brilliant example on how to write NA without using the over-used additions of possessiveness and insta-love but instead create a beautiful web of true love and overcoming self set restrictions.

Cassie: After being sexually attacked, witnessing a murder and then having her mother commit suicide, Cassie needs to escape her home and try to forget. Aiming to just keep driving and see where she ends up, another small town is the last place she expects to be. Cassie has lived through trauma of all sorts, and is trying to find herself and get past it all. What's wonderful about her is that she is far from some helpless girl suffering in need of saving. She has accepted all that has happened and is actively working through it on her own. This makes for a fantastic heroine. She doesn't need Jake for any self accepting or validation or to help her cope.

Jake: He is a very complex and interesting character. He is not your typical bad boy having done "something bad" and in need for reform. He killed someone and has a past, but alike Cassie, he doesn't need her to save or change him. He does go Alpha Male over Cassie but not in a possessive and clingy method that's off-putting. He is able to give her space but also be the one to go to her first.

Story: So, it's a little cliché with both characters having traumatic pasts etc but it works. It's not a chain of self pity and depression but more about accepting your self worth and allowing people to see the best in you. Taking that leap of trusting someone. The romance was beautiful! It was so slow and built up with a great level of tension as they both developed and grew closer.

This was a brilliant read with great characters. The writing was solid and the story told from both POV of Cassie and Jake, letting the reader get in to their heads and understand their reasoning for everything. I just wish the second book followed on with their story rather than Dante's.