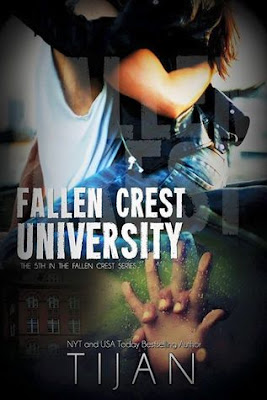 Samantha is reunited with Mason and Logan at university. They all share one enemy, Park Sebastian.

After Mason set  fire to their fraternity house, if he steps out of line his future is over. Sebastian knows this and has set his eyes on targeting Sam, to provoke Mason.

Sam wants to take him on herself and protect Mason. But when she realises she can't even trust her friends to be who they claim to be, Sam discovers the real danger she is in, and also some cruel truths about her own life come to light. Can the trio survive this, or is this finally what breaks them?

Fallen Crest High was my favourite series. When I read book 1 I was hooked like never before. But, somehow, I feel like the stories are weakening and I'm not sure why. I think maybe 5 books is just too many and the characters are becoming weaker or more transparent... or at least the relationship between Sam and Mason is.

Sam: I feel in this she went a little backwards. She has gone through so much and I expected more fight in her. I also found her boring... Her character just seemed so flat and feeble at times. I also ended up skipping any romantic scenes between her and Mason. Not sure why, but I just lost interest in them two this time round. There were many of secrets/lies in this but I found the over-reacting of Sam and Mason just annoying. After everything, I just would have expected them to be more mature with each other and actually understand the reasoning behind any secrets.

Mason: Mason was still himself in this book. He is hellbent on protecting Sam but also focusing on not being caught stepping out of line so to not threaten his career. But I want the scary, ruthless, intimidating Mason back. Not sure if it is because being with Sam has softened him up, but I want him and Logan back as being the threatening presence they once were.

Logan: Thank God Logan is in this story. This would not be a 4 star review without him. He really kept the story solid in my opinion, with his typical "charm", humour and antics. He seems to be the only character still true to the initial one we met back in book one.

Writing: I love Tijan's writing but I found it difficult to follow this one a little. Possibly due to not being able to sit down and get a good amount of reading time in, but the constant changing of POV per chapter and the lack of name use when people spoke, made it difficult to remember who was who. e.g. using I, he, she, we instead of naming people. As I said, this could be my fault though.

Fifth book in the series, it was good, had the drama and everything we expect from Fallen Crest and Tijan. But perhaps time to wrap it all up?