REVIEW; Demons From My Past, by J.L. Leslie 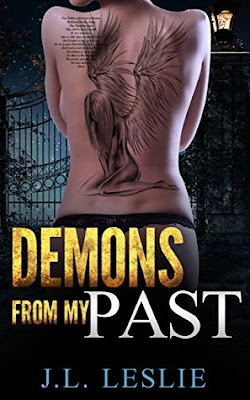 Kingsley is a young woman trying to move on from her past with drugs. Accepting a job at her father's firm is meant to be the chance to rekindle a relationship with him, but from her first step inside the building, she realises he will never take her seriously.
Not only that, Paxton is the CFO of the company, a man who previously kissed Kinglsey at a bar. Kingsley has a fight on her hands; to gain her father's trust, work out her relationship with Paxton, and also try to escape her past for good.

*** Thank you to the author for providing me with a copy of this in exchange for an honest review! ***

The story begins from Kingsley's POV, as we meet her in a nightclub before she performs with her band. She meets Paxton who is out with workmates, and after some flirting they kiss. The romance begins when Kingsley goes to her first day of work and realises who he really is as he begins to play the mind games of wanting her one minute, steering clear the next.

Kingsley: I liked her but wanted more from her. This story isn't a long one so it limits the amount of depth that can be achieved so character development is restricted. She had a strong history and structure - a recovering drug addict, covered in tattoos (so is judged), cast off by her father and attempting to make peace. From all this I expected a much more fiery attitude whereas often she seemed to bite her tongue when I feel she should've spoken out more. She allowed her father to stomp on all her efforts to prove herself and from that, I suppose I admired her determination to not let him win by breaking her. She also became enraptured by Paxton fairly soon - just from a kiss, so it sort of led to an insta-love scenario of sorts.

Paxton: Wasn't too much of a fan of him. We only got snippets from his POV so limited time to understand his persona or mind. He had demons of his own and I wish again, the story was longer to allow for more emotional or deeper investment of the reader to his past. All of his secrets were revealed and packed away just as quickly that I, personally, didn't really feel sympathy or sadness for what he endured. Also, that hot and cold act, although briefly justified, I wouldn't have accepted the attitude/actions as easily as Kingsley did and for me, this took away from their dynamic.

Story: I love the concept of this. But for the amount of drama it had, it needs to be longer to adapt the pacing to an appropriate level. There are multiple story lines unfolding and at times some of them were just too squeezed to allow them decent development. I would have liked more insight into the drugs aspect of things seeing as this turned out to play a vital role in everything later on and been apart of Kingsley struggle to properly break free from her past.

Writing: The standard of writing in this is good, it all makes for easy reading as the story just unfolds naturally. The only criticism is the pacing, which already been discussed. I liked that some chapters were told from Paxton's POV, especially before the end few scenes, to allow the reader some insight into his feelings and outlook on everything between them.
(Mobi version does need formatting; some speech lines from different characters on the same line, chapters ending and starting on the one page, blank pages inbetween etc)

I think this has a lot of potential. There is a unique spin on the story line and makes for a very exciting and mysterious read. If it could be longer just to allow more development and depth to the story and characters, this could definitely be a 5 star read.