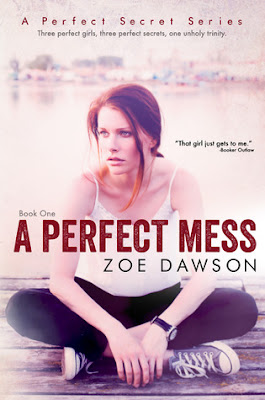 Aubree Walker left Hope Parish following a Summer of secrets, leaving her aunt behind and focusing on college in Tulane. But a phonecall brings her back to the town, following her aunt being in an accident.

Booker Outlaw knows Aubree's secret and everything that happened last summer. And he has secrets of his own that he dreads telling Aubree.

But when Aubree starts getting anonymous threats and messages, Booker assumes protector role and vows to keep her safe. As the two grow closer and remember the events of last summer, their secrets threaten to tear the two apart and ruin them as she may be more dangerous for him, than the bad boy is for the good girl.

This story will suck you in, send you on a wild rollercoaster and spit you out at the end not knowing what just happened!

Aubree: She has an obsession with being perfect and runs away from a dark past and from Booker, to follow a busy, studious life at college. She cuts herself off from her aunt, her only relative, so she does not have to return to the town that haunts her. Pursuing a relationship with Booker Outlaw, is the last thing on her list, especially when she is forced to return and their paths become forever entwined. Booker helps her see flaws are what make people perfect, and to let go of what restrictions she has set herself.

Booker: He doesn't do "forever" and he tells himself to leave Aubree alone- Miss Perfect is the last thing he needs. But when she returns into his life, it's like a second chance for him at love.  Aubree was always different, and when she is in danger he can't help but step up and protect her any way he can. She stirs emotions in him that he's worked years to mask as he is sent on a journey of inner turmoil and despair.

Aubree & Booker: I loved their banter and flirting between them. It flowed so naturally end effortlessly with the right amount of awkward exchanges between them here and there. There was a great chemistry evident from the start, and it probably helped they both had a huge shared secret which brought them closer. What was so endearing was how slow their romance built to one of substance and depth and felt real - none of that instant love nonsense. I liked that Booker called her "Sugar" instead of "baby" that's used in every other romance book!

Suspense: I would've liked a little more suspense in this, although there was a very good mystery element woven in to the story to make it more than just a romance. Admittedly, I guessed from the beginning what had happened last summer so a lot of it was fairly predictable, but the simplicity of it all made it seem more plausible and realistic I suppose. I think there needed to be an increase in threats leading up to the climax, as at times I forgot she was meant to be in danger. I like how there were hints to the secrets surrounding Verity and Boone, which will be the focus of the second novel, so rather than a cliffhanger, it was a nice way to gauge interest in those characters early on.

This is a whirlwind of emotion; there is laughter, fear, tears, death, love, despair, jealousy, everything. Booker is actually the more fragile of them both, and this sets for such a captivating read as we get to read from both POV's. Definitely recommend!