REVIEW; The Mapgies, by Mark Edwards 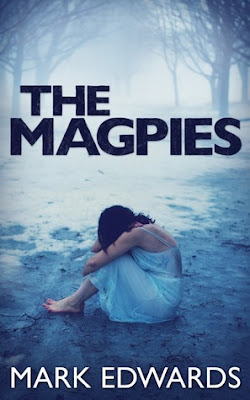 Jamie and Kirsty have found the perfect flat to start their family and new life. The neighbours all seem friendly... or at least at first.
Dead rats turn up on their doorstep, hoax calls to the fire station, recordings of them having sex are sent to them and one of their close friends is left severely injured and in hospital.
They believe the issues are stemming from the Newtons, a couple living downstairs. But when they try to reason with them, it only heightens the attack.
Jamie vows not to be driven out of their home, but as the danger increases, does he really know what he's trying to fight against? Can they make it out alive?

Story/ Paranoia: This was so creepy but worked due to the simplicity of the plot. Jamie and Kirsty have the neighbours from hell, but the subtle extremes of their actions makes the reader doubt if they too are going insane and if the Newtons really are to blame. I found myself doubting everyone they met as possible culprits. The torment is executed so perfectly, it sets paranoia even in the reader and the twists and turns the story takes at random moments sucks the reader into the nightmare with the young couple. Even the tormenting acts change in seriousness and method to really instill how sinister and menacing it all is. After all, how does an infestation of spiders correspond to a virus sent from Jamie's email account?


Writing: There are a some mistakes in this (although don't know if have been corrected since the version I had) which upsets the flow. "I don't meant to be horrible". Incorrect names were used at times, explaining the actions/speech of Mike and it had "Chris rolled his eyes". I also felt the time jumped a bit oddly within one scene... "He wiped his forehead with the sleeve of his t-shirt before making his way back out to the car and bringing in another box. Kirsty had fallen asleep on the sofa, and he woke her with a kiss." Seconds previously Kirsty had been talking to Jamie as he brought in boxes and it jumped to later in the day in the same paragraph. It can just cause a little confusion as the time jumps a few times without a break and certain scenes don't make sense as there's been a sudden setting change etc.

Ending: I'm really undecided with the ending. I don't want to give anything away but I was a little disappointed with where all the characters ended up and the relationships between them. The final ending also seemed too sudden and rushed after the climax, as if a quick explanation was thrown in after a whole story of horror.

I loved this. It got a lot darker and serious than I had initially expected and I am glad that it did. It's absolutely harrowing and unnerving reading about the power neighbours can have over your life. It's crazy. I'd recommend this to anyone who loves a psychological thriller or something a little bit different.