Kami Duvall doesn't do love. She is incapable of being loved and loving - at least that what she keeps telling herself.

Running from her haunted and abusive past, Kami finds herself in a bar and meeting Blaine - the one person who makes her question everything, who ignites deep feelings and emotion foreign to what Kami knows.

Neither can deny the sparking chemistry between them, but Kami is permanently haunted by demons and hellbent on keeping Blaine at a distance. But how long can she push him away before he walks, leaving her even more broken than before? 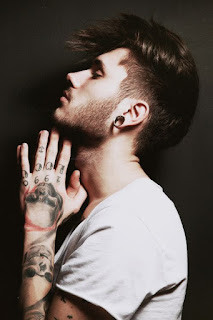 I'll just get straight into it and say these 5 stars are for sweet Blaine Daniel Jacobs.


"Even shrouded in ink, I could tell his arms were magnificently cut and defined with muscle. Muscles that flexed and quivered as he leaned against the bar, causing his biceps and shoulders to strain against his fitted, plain white t-shirt."

We are lucky enough to meet the wonderful Blaine right away in the first chapter and what an encounter!


"...met with a hooded pair of chocolate brown eyes and a boyish grin. His hair was covered in a worn baseball cap, and he had just the right amount of scruff on his chin and upper lip to give his baby face an edge. His hands and arms were covered with intricate, colorful tattoos."

Then Kami gets to do a tequila shot from his neck, going down in history as one of the most extraordinary shots taken as she runs away from the heat of it all.

Kami: Kami is a tough cookie although she considers herself as crumbs. She has had an awful life and her demons still haunt her as she is never truly safe. She can't help but fall for the allure of Blaine, despite knowing she couldn't give him forever, and it was so heartbreaking seeing her heart break in an effort to protect him from herself, when she was the one needing protecting!!! But, towards the end it got a tad annoying, with her throwing out the same lines and it did become a little bit of a pity party. Because of her traumatic past, it worked for most of the book with her actions definitely being totally justified, but at the end I wanted to scream. I would've grabbed onto him and never let go!

Blaine: Reading YA/NA you always have those book boyfriends and ideas of perfection, but this guy, this is the one you really want. He is so kickass and can go from concrete to kittens in the blink of an eye. He speaks the truth and from the heart, having learned not to keep things to himself, and his brutal honesty scares Kami (as it probably would me too.) He's tough, but he has a heart of gold that he's not ashamed about or tries to hide, making him even more endearing. And he shows he is human - he vows to not give up on Kami, but her persistent pushing him away does eventually take its toll on him as he deals with his own struggles. He isn't portrayed as a total angel or bad boy, just your average guy and it works so well for him.

Writing: The writing is fairly decent, and probably better than what I normally expect from NA. Often the story is the main focus and the writing rather standard, but there were great descriptions (of Blaine) and diverse settings for conversations or scenarios, keeping the story fresh. I loved that it changed POV between Kami and Blaine. I nearly enjoyed reading from Blaine's POV more, I think.

Topic: There are some taboo/dark topics in this and the author doesn't dance about them or glorify them. They're portrayed as brutal as they are and this makes Kami's suffering real. It isn't a mish-mash of random abusive acts, but a deeply woven abusive thread, that also makes it so much more raw. Kami isn't just "broken" from one or two incidents but from a world of pain. The author manages to really treat this so delicately, by showing Kami as such a crushed soul but with so much fight in her. She's alive and I could sense her defensive nature from the core. Even still, there isn't an overload of the sadness, it's there, but Kami does have fun times which are so crucial for this story to work and it's why it does I think - it's not just one block of torment and upset, her growth and development and inner turmoil is evident throughout.

Fear of Falling has flown into my favourites list. I love it so much! I read it within 24 hours and it left me empty once completed. Proper book mourning going on. S.L.Jennings depicts domestic abuse so carefully but truthfully, it's chilling, but the warmth of Blaine entering Kami's life helps create a beautiful story among the torture endured.