REVIEW; 18 Things (My So Called Afterlife #1), by Jamie Ayers 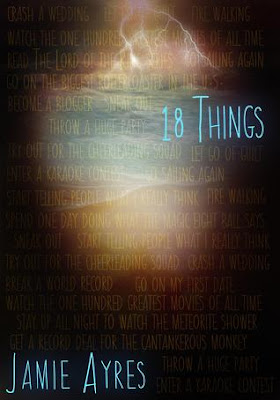 Olga Gay Worontzoff is crushed when her best friend and crush, is going to Prom with someone else. In an effort to show she wasn't bothered, she invited him out sailing. But, in a freak lightening storm, Conner got killed and Olga is sent down a spiral of guilt, leading to her suicide attempt.

At therapy, Olga meets Nate, who soon becomes her best friend and helps her forgive herself about Conner's death. He also helps her compile her list of 18 Things, suggested by her therapist. A list of 18 accomplishments to be achieved in the year of being 18.

But as she crosses off the items on her list, her therapist admits there was a much deeper and vital meaning to her list... one Olga never once dreamed of.

I'm a little confused with the genre of this novel - I was expecting the paranormal aspect to hit a LOT sooner. And even still, it's not so much paranormal and more so just a little strange twist...

Writing: The writing in this really threw me off and took away from the story. "true dat" was said by nearly every character, "da bomb." It's just incredibly cringe worthy. And then childish language like "nearly touched her ta-tas". This is a YA novel, so why not just say breasts/boobs/chest? Why chose such juvenile words? Also, this novel could pass as a song-book for the amount of pages filled with lyrics... which I got very quickly bored of as ultimately without music I find it hard to care for song lyrics, especially when from an original song that's unknown.


Olga: I didn't really warm to her as much as I wanted to. I was of course expecting the grief journey and guilt, but for some reason I couldn't bring myself to care for her well-being and I don't know why. She was so uptight with her list and then pushing Nate away when it was obvious he cared for her. It all got a bit tiresome and relentless and her constant mental battle between Conner and Nate. I only kept reading to find out what the twist was.


Paranormal: I won't give the twist away but ugh... As it neared the end I could start to predict what it was, although it wasn't all explained (I felt) as how it all worked out for the reader to have an explanation of what we had read meant and fitted together involving all the characters. It's probably better labelled as being more of a religious theme than anything, and if I had known there was such an interwoven religious thread, I probably wouldn't have read this just due to my own beliefs, but it wasn't too heavy, more so just at the end.

Romance: There's deep feelings but little actual romance in this. No more than a kiss.

I feel 2.5 stars is an accurate rating for this. There is a solid concept that's good, but it just needs a lot of work IMO. Language and writing needs a lot of development and some better built characters. Relatively decent read.