REVIEW; The Thread, by Victoria Hislop 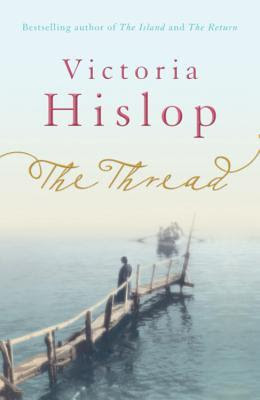 Starting in the early 1900's, The Thread follows a story set in Thessaloniki, Greece. As Asia Minor is destroyed by the Turkish Army, young Katerina is separated from her fleeing family and ends up under the care of Eugenia, a fleeing mother with her two older daughters. Here, Katerina befriends young Dimitri, son of a strong politically viewed power hungry man.
Soon, the city is plunged into chaos of war and fear, as the Jews are pushed out and young men forced to step up and fight with or against. A story covering decades, the reader is brought along the journey of the city itself, and given an insight into the lives of the people and watch how Katerina's life changed unbelievably, from when she was only six years old.

The Island is one of my all time favourite novels and I bought The Thread a few years ago to read but it always got pushed further down my list. Reading it now reminded me of why I loved The Island so much. Although in this case, I have never been to Thessaloniki, it didn't matter in being able to imagine the city.

Writing: I love Hislop's writing style. The story-telling vibe is so captivating and gripping and you're so quickly swept up into the story and plunged right into the epicenter of the drama. I'm not a huge lover of stories set in the past, as they lack the element of being able to relate to the situations depicted, but Hislop has a unique way of depicting her stories that overrides any dislike for historic tales.

Characters: The characters in this are all so diverse and captivating, the story nearly writes itself.


Story: The historic detail that permeates Hislop's novels is unbelievable and probably only fractionally represents the level of research that had to be undertaken prior to writing anything. The Thread majorly covers the time of the Second World War and the reader gains an insight into the affect it had on Greece, a country that normally wouldn't be of main focus of the War. The fact that Thessaloniki was thriving with many mixed religions, made for an environment that was torn apart and relationships and livelihoods destroyed. In an effortless story-telling setting, I learned so much more about what went on, especially politically, at that time and how Greece specifically suffered.
The added little phrases and words in Greek, help authenticate the story and remind the reader of where we are and is a beautiful additive.

Romance: This is really a romantic tale of Katerina and Dimitri relaying their story to their grandson but yet it's not presented as a "romance tale" and I love this. Everything romantic is so beautiful and innocent and makes for a gorgeous read as the two lovers are constantly put up against forces that keep them apart. I nearly cried when Katerina found out she was pregnant and knew it was his and not her dreadful, repulsive, slime-ball husband! (And bravo for cleverly getting rid of him!)

This has definitely made it into my favourites. Having been travelling to Greece / Greek Islands for over half of my lifetime and having Greek relatives, I am obsessed with Greek culture and the language and the serenity and calmness that comes from the little towns and villages. The Thread captivates the very essence of the Greek city and way of life and is a beautiful tale of life and friendships.