REVIEW; All The Bright Places, by Jennifer Niven 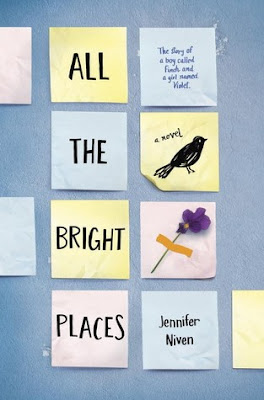 Convincing each other to step down sparks the beginning of a beautiful relationship as Violet surprises herself with how much she needs the unpredictable and "crazy" Finch - who fills his time quoting suicide notes and analysing different methods.

Going hand in hand on a life-changing journey spawning from a class project, they go on the most important and educational adventure they could imagine - but you only see the suffering of someone if they decide to show you.

Holy Mother of all books ever written.

You know those books you read and think "Wow, that was amazing!"?
Or those where you think "I've been punched in the gut!"?
Or even "I've just read a book that describes my thoughts!"?

This book had all three of those statements.

Firstly, I've read mixed reviews and people immediately slating it over its likeness (mainly to The Fault in Our Stars) to other novels and being about suicide with no depth... I really have to disagree. I can see how someone would dislike this and the predictability that goes with it, however what really struck me was the accuracy... The amount of Finch's words/thoughts that were like echoes of what I've thought/said/written really scared the crap out of me. Even the feelings that we often can't put into words, somehow Jennifer Niven managed to do this.

"You don't know how it is. It's like I've got this angry little person inside me, and I can feel him trying to get out. He's running out of room because he's growing bigger and bigger, and so he starts rising up, into my lungs, chest, throat, and I just push him right back down. I don't want him to come out. I can't let him out."

"Because I hate him, because he's not me, but he's in there and he won't leave me alone, and all I can think is that I want to go up to someone, anyone, and just knock them into space because I'm angry at all of them."


I've had such a similar conversation with a friend a few weeks back and it freaked me out so much - but also was comforting to read the same thoughts having clearly been endured by someone else. It's just chilling.

Characters: It's been noted that the characters were strongly depicted as their illnesses rather than actual people. I can understand how this can be perceived but I do disagree. I think it's a tricky topic to write about sensitively whilst also getting the punch across. Not everyone will be pleased but for those of us that have experience with mental illness and knowing how one can consume you to such an extent you feel you have become that label, it's a help reading about it as raw and unromanticised as it truly is.

"We are all alone, trapped in these bodies and our own minds, and whatever company we have in this life is only fleeting and superficial."


Ain't that the harsh truth...

This novel has clearly become a quick sensation and followed in the footsteps of TFIOS and I was wary of actually reading it because of how highly it was rated but also how much it was torn down. For some unknown reason, possibly to try and shed the taboo of it all, mental illness/health has become a hot topic to write about and has in someway become glorified. I didn't feel this happened in this. Anyone who has had any dealings with depression / suicide / bi-polar will know this is a raw and truthful story.

The emotions, feelings, thoughts, actions... they're REAL. They may seem erratic or attention seeking but that's what it's like. And again - it's scary!!!

Despite the blossoming relationship, it still culminates in Finch taking his life. Surprisingly, I didn't cry. I felt a calmness and actual relief for him. I felt immense sympathy for poor Violet. And that's what suicide is. The deceased is finally at peace whilst leaving a wake of destruction and despair.

But at least there's hope for Violet- despite all the bad luck that had come her way.

"Your hope list in accepting your life as it now lies before you, forever changed. If you can do that, the peace you seek will follow."

Many are so unhappy the suicidal teen took his life in the end. Does this signify there's no hope for those suffering? That things don't get better? That all those alike Finch have now been shown that's the only answer?

Not at all of course. Naturally we all take something different from this, but that's not the point in this (I think!). There was no exact reason for Finch's state or demise... but that's how it is. Is there ever one reason for being like him? It's everything.

Of course, there are areas that could be improved or certain aspects implored further but so what? A novel can't delve into the entirety of any subject to meet everyone's needs.

This could very easily become a cross of a review/ personal response but then it would be a very long and stealthy post - so maybe for another time. But this book got me. It struck home and got way too close to the bone but I needed to read this and am glad I have. Love it or hate it, it's a masterpiece of work.