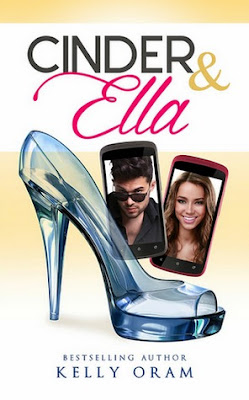 Ellamara's life is forever changed on her 18th birthday where she loses her mother in a car-crash and is left scarred from burns and sent to live with her father and his new family, after not having spoken to him since he walked out on her family. The only positive in her life is her best friend- Cinder, as she knows him by. Except he's an internet friend so she's never met him before.

Cinder - or better known as the new most loved hottest actor, Brian Oliver, fell for Ella long ago, but doesn't want her to know his true identity as she's the only person who treats him normally. Fighting with the media's expectations and trying to protect his career, all Brian wants is Ella, but knows he has to protect her from his crazy life.

But when fate intervenes and their paths eventually cross, can both of them accept each other's secrets? Or will the revealed truths about each of their lives prove too much to handle.

Ah where to start?

Firstly, I was a little apprehensive in reading this after reading negative reviews about it and was worried I'd feel the same and DNF. But c'mon guys! It's a HEA book! You should know what you're getting into from reading the blurb!!


Young-Adult: This is definitely for the teenagers/Young-adults so it's unfair to comment on any of the teen drama or cringe-worthy scenes. It's meant to be! If I were 5 years younger reading this I'd have fallen straight into their world and know I'd be OBSESSED with this story. So hence, I'm rating it from a teenager me - as that's who it's clearly aimed at.


Research: Okay, so there were plot holes with the legalities of A LOT of things in this - mainly in relation to how easily Ella could be committed to a mental institution and how little control she had over her life but so what?! Normally, I am a huge stickler for exact details being correct, but again - 15 year old me wouldn't bat an eyelid at these holes and what about poetic license? It's meant to be a novel of highs and lows and drama. If it toed the line for being legality correct there wouldn't be a story!


Ella: I think it's quite hard to write and depict a character who has been through hell and back and then is suffering and failing to cope brilliantly with new circumstance. It's borderline "feel immense sympathy" or "stop feeling sorry for yourself" and it can be easy to waver between the two as you get fed up of the self-pity. But I never did with Ella. Whilst I could see both sides of why people acted how they did ~ her father, Jennifer, Juliette ~ they never had any tact with actually noticing Ella's reactions and adapting their approach accordingly. They drove me insane and I don't know how Ella didn't throttle them with her cane to begin with. But she really was an extremely strong character - no way could I have dealt with even the bullying in school remaining together like she did. Made of steel!


Cinder: He's not Brian Oliver in my mind. Cinder is such a great book boyfriend. I didn't quite fall or swoon over him, but I did for Ella. He was a mix of the stereotypical Hollywood heart-throb, but with a lot more common sense. Depicted as a somewhat bad boy with a reputation, we didn't get much of an insight into this and his love and affection for Ella was so apparent through how he joked with her.


Fairy-tale: Obviously, this is going to be a romance adventure. Oh wow! It really was such a great twist on Cinderella. It had the slightest thread of the fairy-tale interwoven throughout but it was such an original twist. It is exactly as it sets itself up to me - a whirlwind of drama and despair but all fairy tales have happily ever after's?

I read this in less than 24 hours and loved it. Don't take it too seriously and any die-hard romantic will fall in love with the story. It may not be the highest standard of prose or most factually correct, but look at who it's aimed at. If you look hard enough at anything you'll find imperfections, but choose to see the beautiful story, and they don't matter!