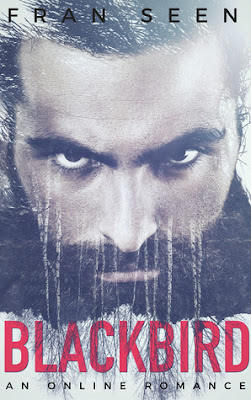 Dolly met her best friend, Blackbird, online over a mutual interest in cemeteries. After 6 years though, Dolly wants to meet him - after all, he's the only one she confides in so it would make sense to speak in person to the human behind the screen.
Dolly asks him to meet, but there stops a consistent daily trend of speaking, as Blackbird declines and goes silent. Taking matters into her own hands, Dolly decides to find Blackbird and find out the secrets he's harbouring, and why he is so desperate to never meet. But can she be prepared for what she will face? Or will she wish she had never even asked?

Alright now, to get it out of the way please note this is a NOVELLA! So, yes, it's going to be a quick and fast-paced read and that is just that so obviously that's no reason to mark it down.

Writing: Firstly, what really drew me into this was the composition. Normally, the novellas I stumble across are not of great quality literary wise and make for dull reads. This however, had a beautiful writing style that is so succinct but evocative and immediately drew me in.

"...cutting into his t-bone steak. His rose gold cuff links gleamed back at me in the candlelight and clinked against his plate. With each saw of his knife, red juices pooled on the plate, hitting the mound of mashed potato like a sea wall."


If that isn't epic descriptive writing done effortlessly and masterfully, I don't what is.

Characters: This mainly is focused on two main characters- Dolly and Blackbird. Obviously there is limited room for full character development but even in this novella, there was some great character battles with themselves and each other and signs of development - both have to face dilemma's that are important to them and their beliefs and weigh up the risks with the gains. Or at least analyse what they want vs what's expected of them - either way, I felt there was a good amount of internal anguish in this to construct solid characters that could easily be related to.


Story: I've never read a story like this and without giving too much away, I think it ranks high on originality. I liked how it opened in the present and the flicked back to an overview of their blossoming friendship and snippets of their witty conversations. I laughed so much during this, at scenes or even at just one-liners and although once "the secret" is uncovered, it's a little predictable as to where it's all heading, it still makes for an exciting read. Throw in the craziness of Dolly's family unit and it's just one whole rollercoaster following them alone.


Improvements?: Hrmm, like any novella, it could be longer but that's like judging a little meerkat and saying it'd reach the leaves easier if it were a giraffe - this just isn't a novel so put that aside! Personally, this would have worked brilliantly as a slightly longer novella with maybe a little more torment and anguish before the HEA. It all fell in place quite easily after a certain point. Some of the conversations could have had more depth or building to them but that's getting quite down and pedantic about it.

Getting over it's length, this is a quirky, great quick read and I read it over two sittings and had to refrain from reading it at work to complete. The writing flows effortlessly and the story develops at a rather suitable pace for a novella - there's a hook, a dilemma, drama, and a resolution and it all works fantastically.