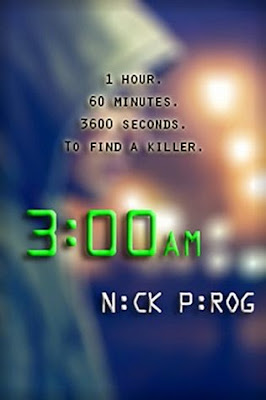 Henry Bins suffers from a condition named after him. He sleeps 23 hours a day and only wakes up at 3:00am for one hour only. But one day he hears a scream from across the road and sees The President leave the house.

After realising the woman has been murdered, Henry's main suspect is The U.S. President. But can he discover the truth with only being awake for 60 minutes?

And what happens when he too, comes to be on the list of suspects?

I love original pieces of work so when I stumbled upon this, I knew it was my type of thing. It was sitting in my Kindle Library for about a year until I got round to finally reading it and I enjoyed it.

Novella: To start off, this is a novella. Something I had missed when buying it. It only has about 100 pages and this was a huge disappointment. Even more so as it ends at 70% on the kindle too... There was such a great story to this, but it was too fast and quick. I like proper meaty stories and this sounded like one - granted it was my mistake - but I felt this had so much depth to it, that it could easily have been a proper novel.

Story: I'm pretty torn with this. Half of me wants to pick apart the errors or problems but then the other half wants to applaud the original idea.

Plot/Ending: The main appeal of this book was the mystery of "Who Dunnit?" Did The President commit the murder? Most likely not, but we still don't know. I love trying to beat the character into working out the culprit and motive... but this? Come on... the conclusion came out of nowhere and it was just a messy conclusion. Didn't enjoy it or believe it. Just didn't feel right at all and was a slight let down...


Positives?: Right, so I still rated this 3 stars so there must have been some good points. And there were... To have packed all that was into such a short story was impressive. Yes, I would've preferred something lengthier, but I can't change that. Henry Bins was an interesting character with how he has adapted with his condition and it was a unique and original concept. There were some fun scenes and I did laugh more than once. If you don't read too much into the finer points, it is a great little story.

Do I/Don't I recommend this? Yeah, sure why not?! It's a short little story that has so much going on and makes for a great read. Won't take more than a few hours to get through and I did enjoy it. Maybe just read it with a light pair of eyes.