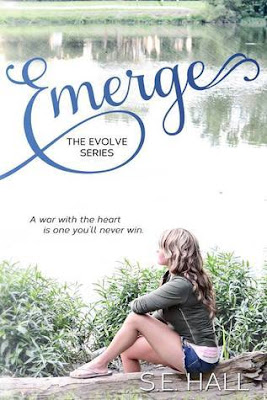 Laney Walker doesn't date or pay attention to boys. Until her best friend, Evan Allen walks out of the friend zone and clinches her heart. A perfect romance, threatened by their departure for college apart.

Breaking up for their time away, but still "together," both deal with problems and circumstances that are threatening their commitment and happiness.

But then there's Dane Kendrick. He makes Laney feel all sorts of new things and they embark on a relationship unalike what Laney had with Evan. But when it comes to choice, will it be the new thrill or the comforting best friend?

Like, what a whirlwind of emotions! Torn between two men (where no cheating actually happens,) and normally the reader is so biased but both Evan and Dane were just so sweeeeet and ARGH!

Laney: Okay, it took me a while to warm to her. I can't comprehend how she was so clouded to Evan liking her and then instantly going along and falling for him. Kind of over those girls that are meant to be dropdead gorgeous but yet don't realise it - just a bit cliche. And then the typical shy virgin girl but is master seductress, just no. Moving on though, I really felt for her. She'd had a rough run at life and she did no wrong in ending up in the situation she did end up in- and it was definitely a difficult choice between the two leading men.

Evan: So we meet him first and fall for him straight away. He's the supportive best friend who really has deep love and admiration for Laney and she is clearly his world. We all want someone like him! He's been there for her, would do anything for her, understands her. He is unbelievably understanding!!!! But distance is the killer. Evan is someone you need with you, by your side. And once doubt creeps in to sleep with distance, you either fight or flight- and the latter is easier when there's someone waiting to fly with you.

Dane: So I wasn't a fan to begin with. I was rooting for Evan and Laney to fight through. But he's impossible not to love. He's got humour and charm vs Evan who was a more sensitive guy. He clearly wants Laney (will ignore the insta-love) but respects that he's not going near if she's Evan's. So, he's sort of the bad boy in this triangle, but without the bad! He has the utmost respect for Laney and fights fair and square for her.

But Evan (/Laney) sort of walked into disaster, which made me side with Dane at times.
Onto Laney;

They went their separate ways, having not resolved anything and then he made that big a move without even consulting Laney? NO NO NO NO NOOOO!

But then how romantic! He loves her, he really loves her and he is hurting because he knows what caused their difficulties and he does the ultimate act to prove his love. I really feel for him the most as he tried so much to make Laney trust him and wait for him and then she just moved on... I'M TORN!

I really don't know whose side to be on; Evan's, Laney's, Dane's. They're all innocent but sort of thrown into this situation and someone has to get hurt.

I am so in love with this book but torn and hate it at the same time. Certain aspects hit close to home and make me sad but a book with that much powerful control over the reader's emotion can't be ignored. I need to finish this series for definite although my heart may regret it. Glutton for punishment.