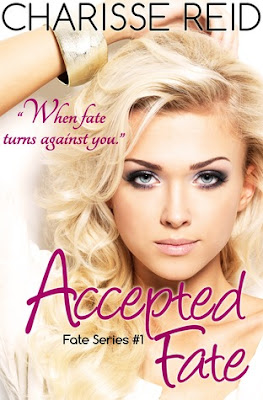 17 y/o California girl Kinzleigh Baker doesn't do dating or boys. Planning to never marry and settle down and only focus on her cheerleading career, falling in love is not an option.

But then Breyson Abercrombie visits California for a week and collides with Kinzleigh. Caught by her beauty and innocence, he wants her more than he's ever wanted anyone. She tries to ignore their attraction, but finally agrees to enjoy the week together before he has to return. One rule - no attachments or further contact.

But then Kinzleigh's world is thrown upside down, and she wonders will she ever get over Breyson, as he tries to get past her. But if it's true love, will their paths collide again? And if so, what other challenges will the pair be faced with?


I am guilty of prejudging this book. I'm not a fan of the pageant girl cover and thought Kinzleigh would be a spoilt stuck up character. However, negatives aside, this was a quick easy read, with a new take on young love.


Kinzleigh: She was a rich, gorgeous girl who all the guys fawned over, but she was probably one of the most genuine characters with those traits. She had a great innocent and modesty to her which meant you couldn't help but warm to her. As sweet and honourable to her morals as she was, she was a tad over-dramatic at times. The whole virginal angel routine wore a little thin after a while too - I find it hard to believe any 17 year old (regardless on your opinion of Love) would ignore the attention of all the pining men.


Breyson: Apart from his jealous side, he was mostly adorable. I liked how it wasn't a "love at first sight, no longer a player," thing, and the gradual build up of attraction he felt whilst battling denial. It seemed more plausible that someone who didn't do relationships met "The One," but took some time to see it, rather than instant conversion. That concept alone earned a star for this book off the bat. Not sure if he'd make it into my Book Boyfriend list as he could be a bit full on, which I felt didn't fit his persona much. Changing his flight back to New Orleans seemed a bit of an excessive action...


Writing: There were a fair amount of typos in this as well as a bad conversion to Kindle format. The layout of letters, or texts etc were all distorted when viewed on my kindle. There was nothing fantastic about the writing itself; all fairly easy-read language and syntax, but the typos got in the way, e.g. "Imaging" instead of "imagining". As for the constant love battle between Kinzleigh and Breyson, it's a bit tedious for half the book reading about their declaration of love and  commitment, especially as they're 17.


Content: I did like this book but there are some issues that I need to mention. It is a very gender stereotyped story, and I suppose can only be related to by people in similar roles in real life. I for one, was not one of them. Both main character's wanted to be in the NFL as footballer and cheerleader. Everything was described about their physical being. The clothes they wore. There was too much emphasis on appearance sake. Have to admit too, a small factor, but the names all annoyed me. I like in a book when there are original names included, but this took it a little too far. Kinzleigh, Breyson, Londyn, Berlyn, Brylee, Konnor, Adalynn... Just made me roll my eyes after a while. Got a bit tedious reading every chapter about how both characters despised love and would never let someone hold their heart blah blah blah. Mention it once or twice but move on. Please.


Slut-Shaming: I'm tired of books romanticising the virgin and shaming the "slut".  Without getting into it too much, everyone views sex differently. Some as an act of love, others as an act of pleasure. Some view it selfishly, others selflessly. GET OVER IT. I was tired of hearing Presley be portrayed as a slut, and by her best friend. Most of the characters had casual sex with whoever and they aren't harming anyone so why the need to call them out on it? Does that mean anyone that has sex outside of a relationship/marriage is a whore? That's certainly the impression I got from this.


Ending: Totally unrealistic and way over dramatic. Was heart-wrenching, so had the desired effect, but whatever. Ended with a cliffhanger which most people love to hate.

This turned out a lot more negative than I had anticipated and that was not my goal. But some of the bad points just stuck out a lot more than the positives. That being said, I would still recommend this to probably Younger Adults. It's a bit too "high school" for NA. It had good twists and really good pace execution, and it did play on my emotions so that has to be a good sign. Unsure if I'll read the follow on to these, but this one was free so if you like light YA romance, give this a try. It's an excellent debut novel so Charisse Reid should be proud, however it just needs some polishing.