REVIEW; One Condition (The Lust List #1), by Nova Raines 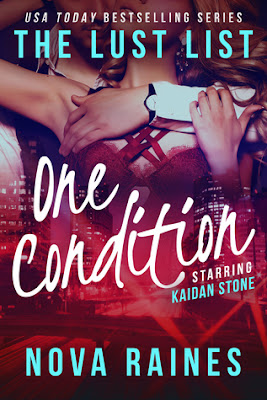 Hayley Wade returns to Los Angeles following the death of her rock star father. Leaving her a large inheritance with conditions, Hayley is left to deal with his dangerous debt involving drugs.
Kaiden Stone is number one on The Lust List - a list of the hottest, wealthiest bachelors. In a Paparazzi encounter, he "saves" Hayley and the pair have an undeniable chemistry. But both have pasts and drama that catches up with them, and when lying to Kaiden becomes part of the plan to get her inheritance, all they've built up could fall down even quicker.

This was an OK read. I read it in nearly one complete sitting so it definitely drew me in and held my attention. I think in one way, I wish it had been longer as it all just felt like an introduction to the characters and their story more so than a first novel in a series.

Hayley: I liked her for the most part. She was independent and had been through all sorts of hell and now suffering for her father's actions. She had no interest in being a part of the Hollywood life and I became totally swept up in her whirlwind of a life. However, I was a little let down with how she acted in the club with Kaiden... I felt like she didn't have any self respect or dignity and at this stage she hardly knew the guy! She lived for the validation from Kaiden rather than just being her own person completely and not caring what he thought. Oh well.. everyone has flaws.

Kaiden: I finished this still not really understanding him. Like Hayley, I couldn't help but like him from their first encounter. But then he became a total riddle. This sort of worked though, no guy is an easy read. At times he appeared like an ass and I'd have expected that by the end we would get some insight about him, but nope... nothing. Hard to feel anything towards him, positive or negative. Mystery is good but too much and you just become disinterested.

Story: The story was pretty standard for a NA novel. Wasn't too much of a fan the drama at the end, personally. But it was a good cliffhanger and a part of me really wants to read the second book to find out what happened, sooo it did succeed in grasping my attention at least. The chemistry between the two was palpable and they had good banter.

A quick read but an electric one. Filled with chemistry and drama and death threats, this is a captivating romance read.