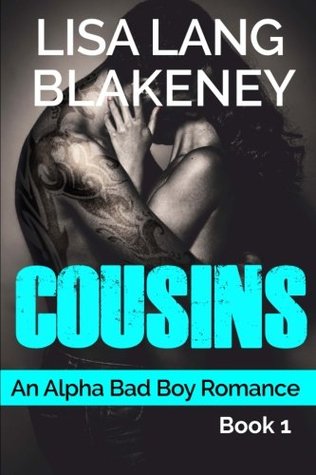 Elizabeth is with her boyfriend when thugs break into her room, threaten her boyfriend and beat her up. Tied up with drugs, he very quickly becomes her ex. For her safety, she moves in to live with her Aunt.
Her cousin Roman comes and goes. The same cousin who used to prank her as kids. Meeting as strangers, the two form a bond on intense chemistry and attraction. When they meet as cousins, they wonder is it too late to ignore all they'd built as strangers.

Firstly, by the time I've gotten around to writing this review (less than a month since reading), I've already forgotten the majority of the book... especially the ending.

Elizabeth is attacked when with her boyfriend, and for her safety, moves to live with her Aunt. She married and acquired a step-son; Roman. Roman and Elizabeth aren't actually blood related, so it's not as taboo as it all sounds. They met briefly when they were kids, but twenty years on they now meet in a night club and don't recognise each other. When their paths continue to cross, their chemistry is unbelievable, and they begin to act on their mutual attraction.

Roman is a fierce, hot-headed guy who fixes things for a lot of money. His latest venture is to fix up an elite night-club subject to an attack. His latest unprofessional venture is to mind his spoiled cousin, Elizabeth. Roman is fully aware of the effect he has on her, and uses his charm and power to make her squirm and cringe at every possible moment until she gives in to their undeniable chemistry.

Story: This was a decent story line. The romance is not as taboo as initially considered, so it's not too daring or cringe, but there's still lines to be crossed and rules to be broken that make it somewhat forbidden. The writing level is rather average, making for pretty easy reading. We also got a  dual POV and I didn't like that aspect. I think this would have had a lot more allure and suspense had it just been from Elizabeth's POV, as then there would have been some reader doubt over Roman's intentions instead of finding out everything.

It was a decent quick read, but nothing too memorable. Ends on a cliffhanger too, which I didn't really enjoy.