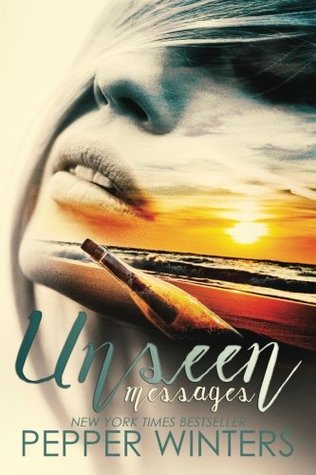 Estelle ignores all the signs before getting on her flight. She knows the universe is trying to tell her something. After crash-landing on a secluded island in Fiji, she has to step up. Along with Galloway, the pair find themselves taking care of two orphaned children, and learning to survive in the wilderness along with their injuries. As hope turns to acceptance, the new family unit have to fight to survive and live alongside each other, adapting to island living.

With 591 pages, I was so excited to get lost in this book and escape. Although not as lost as they get in the book!

I feel like this is a total different genre of book compared to what Pepper Winters has written before. There was no taboo or dark themes in this.

Estelle: Poor woman! She has been flung into stardom and following her music tour all she wants to do is go home. Despite all the warning signs to not get on the plane - she ignores them so she can get home quickly. I don't quite understand her reasoning to get on a dodgy helicopter after her haste to return home, but hey ho.

Galloway: I didn't really like him for the majority of the book. He only saw Estelle as a sex object for the initial time when stranded. He had a broken leg and couldn't walk, but was angry with Estelle for taking care of them. How archaic! While the survival instinct flared up in Estelle, I never felt it did with Galloway. However, with the dual POV, we do get an insight into his past and thought process and I think this really saved him as a character as viewing him from Estelle's POV would not have sufficed.

Pacing: The book spans about 7 or 8 years (I think). For the majority of the time on the island, the pacing was brilliantly done - with time skipped when necessary but notable moments developed, so it never really felt like it dragged.

Plot: I enjoyed (more than I expected) the story of survival and the information of how they learned to cope and survive e.g. Estelle testing the plants for any allergic reactions to try and discover more food. There was one death I really didn't enjoy (but sort of understand why it was required) and it tore me up! There was a lot regarding the blossoming romance that frustrated me. If there had just been some better communication there would have been a lot less drama and hassle, although that would've defeated the a lot of the sub-plots then...

Ending: I loved that the story continues beyond being rescued and the twists still occur once they get to Australia. There wasn't that immediate happy ending at being rescued and returning to civilisation. I actually think this was one of the best endings to such a great long story.

I think this would be a wonderful holiday read to get totally lost in. It's quite dangerous and graphic, with some truly heart-wrenching scenes.