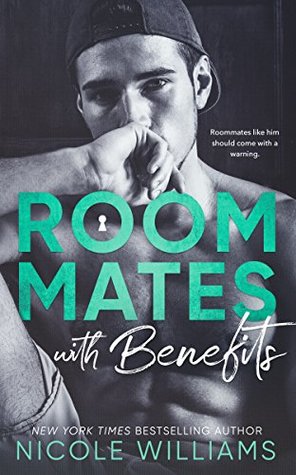 Hayden Hayes is pursuing a modelling career in New York. With only a few dollars to her name, she moves into a tiny apartment, where bedrooms are separated by dividers. Oh, and her roommate is Soren Decker... a guy.
The two fight over everything, but Soren has her back. As time flies, they both have to acknowledge their mutual attraction. But Soren is fighting for a baseball career and distance threatens their relationship.

I enjoyed this so much. It was such an entertaining and witty read for the most part, with some twists that do pull on the heartstrings a little bit and bring you back down to Earth with a bang.

Soren and Hayden's relationship at the beginning was hilarious. I really think Nicole Williams portrayed brilliantly what it is like when a girl and guy live together and the little things that annoy a female that males don't even notice. It allowed for some hilarious dialogue and sass.

Soren was an absolute sweetheart. He has the cocky sense of humour (penthouse view - lol) that although irritates Hayden, you can't help but love. What really made him a concrete good guy in my eyes was the balance of sacrifice. From the beginning he was willing to help Hayden financially, but without straight up telling her and embarrassing her (hurrah for a guy not TELLING a girl he'll take care of her in an arrogant alpha way!) and the subtle gestures he did to help her out while considering Hayden's feelings were amazing.

At the same time, he had his own career dream and he was ambitious and focused and not willing to just give up on his own dreams because the woman of his life walked through his door. I really, really, loved that. I'm tired of reading stories where a character gives up everything they've ever wanted for the person they love. (I know, that's what love is, but when you're young, you should still keep in mind your own dreams!)

Hayden was trying to make it in the modelling industry, and still shows her innocent and naive side. Now, I've read a few negative reviews claiming Hayden was so stupid not realising her agent was making advances on her and defending his behaviour. And I'll just respectfully say that those reviewers have clearly never worked under an older male, as a young female, and put up with similar behaviour (perhaps out of naivety) so to not upset the apple cart and not make a who-ha out of minor actions until lines are actually crossed. Nowadays, it is so hard to know what is and is not meant as a joke or crossing boundaries and sometimes girls just suck it up to get where they need to be in their career... and Hayden didn't stand for his advances when he clearly crossed the line... moving on.

I really applauded her ambition and empathised with her fear about losing Soren. Although a little annoying, her fears were realistic and required to keep the plot active. I would've liked more of an update regarding Hayden's career in modelling... but hey ho.

I'd recommend this to anyone who wants an entertaining, romantic read. A great charming story!