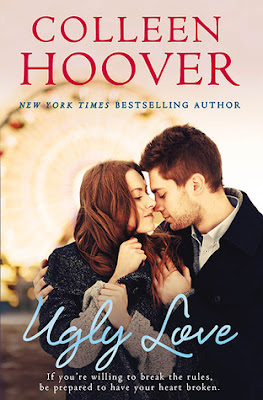 Tate Collins moves in with her pilot brother, and meets his friend who lives across the hall - Miles Archer. Getting off on the wrong foot, they both share a mutual hatred and attraction for each other. As they both allow the attraction to win over hatred, rules are set. No past, no future - just the present without any promises. Tate believes this is enough as she tries to dance around Miles' pushing and pulling and constantly be what he wants of her. But when she finally puts herself first, is it too late or can they have a future together?

Writing: One of the best things about Colleen Hoover's work is her writing style. All of her novels are so quirky and presented in such unique ways that just captivate the reader at how she pushes the boundaries again and again.

Romance: Hmm... this is where the book fell for me. In one way, it was a beautiful tragedy of sorts. I couldn't feel the chemistry between Tate and Miles. I understood (sadly) the battle Miles was facing about being afraid of loving again as the possible hurt just isn't worth it and thought his internal battle about getting close to Tate was depicted well. For once, the male character who doesn't want to settle down didn't waver at first glance and stuck to his guns, and for this, I applaud.

Tate: I'm torn between loving and hating Tate - a good thing in this instance I think. It's very easy for women to judge the female character for letting herself be used and abused and hiding her feelings just for some time with the guy she likes. We're all guilty for causing our own pain and being available at the drop at a hat. But it's a little teenager/early 20's move. At Tate's age I sort of wanted her to be a bit stronger, even just at moments when Miles totally broke her heart and yet she still didn't make him wait or sweat it out. I really wanted her to just lose it with him for once! She was way too patient.

POV: The dual point of view in this novel was split in time as well; Tate's POV set in the present and Miles back when he was 18 and in a relationship with his first love. This half worked; I wanted to know what had happened to Miles and this kept my interest, but I did speed read his parts. It sometimes felt like more of a filler in-between building the suspense between Tate and Miles sorting their shit out.

Honestly, this wasn't as good as I was expecting, but was still an enjoyable read that definitely pulled on the heart strings. I think maybe, I'm just over the dramatic love stories for the time being...